Fun Time: THE PAKISTANI MAN WHO FLEW THE INDIAN FLAG 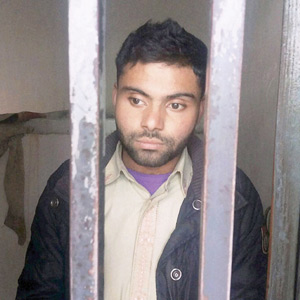 A Pakistani man named Umar Draz was arrested for hoisting the Indian flag on his roof. According to a Reuters report, Draz has been charged under the Pakistan Penal Code and could face up to 10 years in prison for what police describe as an “anti-state” act and what I describe as a “cool-dude” act.

Draz, a 22-year-old tailor who lives in the eastern Pakistani district of Okara in Punjab, says he was paying tribute to Indian cricket captain Virat Kohli for his masterful performance in India’s T20 victory over Australia. He got carried away with his admiration for Kohli—and soon the police were carrying him away.

Draz is such a big fan of Kohli’s that he stuck posters of the Indian cricketer around his house. Thankfully, this is not against Pakistani law, though the authorities are probably checking to see if the law prohibiting blasphemy against any religion might apply. After all, cricket is a religion in Pakistan and India.

As a sports fan, I think it’s wonderful that Draz didn’t let nationalism or the often-hostile rivalry between neighboring countries keep him from admiring Kohli. He was so thrilled about Kohli’s performance in India’s victory over Australia that his first thought was, “Let me fly the Indian flag on my roof. Who cares what the neighbors think?”

Someone tipped off the police, unfortunately.

Tipster: “Hello, police, I called to report an Indian flag.”

Policeman: “Didn’t you call us before?”

Tipster: “Yes, last week I called to report an Indian flag on my TV set. Did you arrest them?”

Tipster: “The people who made my TV. I think they live in China.”

Policeman: “No, we didn’t arrest them yet. We are still reviewing the case. What are you calling about today?”

Tipster: “You won’t believe it! There is an Indian flag flying over a house in my neighborhood.”

Policeman: “Are you sure it’s a house? It might be the High Commission of India.”

Tipster: “Are they allowed to fly the Indian flag?”

Policeman: “I’m not sure. But just in case, we’ll arrest first and check the laws later.”

The police dispatched their ASIF (anti-state Indian flag) squad to the scene of the crime and apprehended Draz. He was soon sitting in prison, exchanging stories with other criminals.

Draz: “What are you guys in here for?”

Old man: “I stole money from an orphanage.”

Young man: “I drew a mustache on a photo of Nawaz Sharif. What did you do?”

Draz: “I showed my support for an Indian cricketer.”

Old man: “You bastard! How could you do something so contemptible?”

Young man: “Me, too, but I keep it to myself. I cheer secretly. What did you do?”

Draz: “I flew the Indian flag on my roof.”

Old man: “May Allah have mercy on your soul! Why didn’t you just jump off the roof? That would have been smarter.”

I hope India does not have a similar law. People should have the freedom to express pride in whichever country they want. It’s common in North America for immigrants to display the flags of their native countries. On India’s Republic Day, the tricolor was hoisted at a number of events in Canada and America and, as far as I know, nobody got hauled off to prison or deported to India.

For all we know, Draz may have close ties to India. His grandparents may have been born on the other side of the border, in the pre-partition days. Draz may be an admirer of Bollywood movies and music. He may love Kingfisher beer and have drunk a little too much of it.

In an ideal world, the Indian government would intervene on his behalf. They would send a letter to Pakistan: “Umar Draz got carried away. Please forgive him. Just to make up for it, our railways minister Suresh Prabhu will fly the Pakistani flag over his home for one week. Then we will put him in prison for another week. He has also agreed to have S.P. (Super Pakistan) tattooed on his arm.”