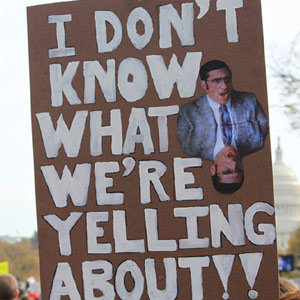 The tweet was liked and retweeted thousands of times. No one remembered who the original tweeter was, but they understood the importance of the message: “We’re protesting outside the White House this Saturday. Bring your signs and loud voices!”

Melissa Diamond, a 30-year-old mother of three, showed the tweet to her husband. “Wanna go?”

Mike Diamond shrugged. “What exactly are we protesting?”

The Diamonds took their 16-year-old son, David, along. He wanted to write a report for his school newspaper. He was surprised to see more than 10,000 people gathered in front of the White House gate, coming together through a single tweet.

“Are you concerned about all the people coming across the border?” David asked.

Added the other man, “We want to set a Guinness World Record for longest work of art.”

“What are you going to draw that’s so long?” David asked.

“You want to get rid of all borders?” David asked.

“Well, most of them,” one woman said. “You should see the ones on my mother-in-law’s living room wall. They’re hideous. I’ve told her to remove them, but she’s a traditionalist. She loves borders.”

David walked to the other end of the crowd, leaving behind the chants of “Build the wall!” and “No more borders!”

“Are you upset that Facebook is sharing your data with other companies?” David asked.

The man shook his head. “No, I’m upset that Facebook is allowing all my friends to share their vacation photos. Because of that, my wife and I are always miserable.”

“Can’t you just unfriend them?”

“I could, but who would I share all my dog photos with?”

“Don’t you want America to be first?” David asked.

“I do, but we’re taking it too far,” the man said. “We’re first in school shootings, first in illegal drug use, first in incarceration! It’s not always good to be a world leader.”

David returned to his parents, who were holding signs of their own. Melissa Diamond was holding a sign that said, “Clean up Your Mess!”

Mike Diamond was holding a sign that said, “Stop this madness!”

“What madness are you talking about, Dad?” David asked, hoping to get another good quote for his article. “The president’s tweets?”

“No, your mom is trying to get me to do more cleaning at home.”

“Why are you protesting here, Dad?” David asked.

“So other men can join in. We mow the lawns and take out the trash—we shouldn’t have to do household cleaning, too.”

Melissa smiled at David. “Don’t you just love it?”

“Does that mean Dad’s going to get his way?”

“No, but he’s free to keep protesting.”