COVID-19  In-depth info for Indians in Atlanta/Georgia. Click here
Home > Magazine > ChaiTime > Fun Time: Too Much Monkeying Around in Delhi

Fun Time: Too Much Monkeying Around in Delhi 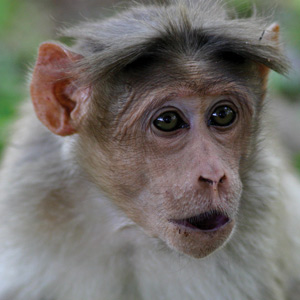 If you’re visiting New Delhi, you may spot dozens of men monkeying around—and not just inside government buildings. You’ll see them in the streets, trying their best to sound like langur monkeys. They’ll make hooting and whooping sounds—the type of noise you might hear at a soccer match—all in an effort to scare off the throngs of smaller macaque monkeys that roam the city.

As reported by the Wall Street Journal, 40 men are being employed by the New Delhi Municipal Council to mimic the langurs, which are natural enemies of the macaques. If you missed the job advertisement, here’s what it said: “Wanted: Men who want to spend their days making monkey sounds. Please do not apply if you have made these sounds on trains or buses to harass women. You must be a professional monkey impersonator, preferably with a degree in langur linguistics. Monkey costume not required.”

It amazes me that the 40 men are able to scare off the macaques using just their voices. Monkeys must not be as smart as I thought. You’d think at least one of them would realize that the langur sounds are coming from humans.

Second monkey: “Where? I don’t see a langur. I just see a human waving his arms.”

First monkey: “We’d better run, just in case. It might be a langur disguised as a human!”

Second monkey: “If that’s a disguise, it’s a really good one. Look, he even has a cigarette in his hand.”

You may be wondering why the men aren’t wearing monkey costumes. Well, they tried that a few years ago, but tourists kept stopping to feed them. “We got tired of shouting, ‘I’m not a monkey,” one man said. “Some of them thought we were talking monkeys and tried to take videos of us. They thought Indian monkeys are the smartest monkeys in the world.”

Added another man: “We wouldn’t have minded all the attention from tourists if they had fed us some tasty food, but they kept throwing scraps at us. After a while, I started throwing it back and they didn’t like that. ‘Ungrateful monkey,’ one of them shouted, almost sounding like my mother.”

Until a year or two ago, it was common to see men using real langurs to scare the macaques, leading the langurs around on leashes like pet dogs. But the government started enforcing the Wildlife Protection Act, which protects langurs from being owned, sold, employed, or elected to higher office. The langurs had to be freed (or at least kept at home), but not before teaching their owners the basics of langur communication.

It may seem strange to see men on the street mimicking langurs, but you have to give credit to the New Delhi Municipal Council for attempting to do something about the monkey problem. Monkeys cause more trouble in Delhi than any other animal that doesn’t know how to drive.

At their worst, they bite people, sometimes causing serious injuries. Many of them are also members of the Monkey Crime Syndicate, specializing in burglary and theft. They break into homes and take food or other items, or even grab food right out of people’s hands. Some of them, perhaps working for the cable company, have even been known to break satellite dishes.

The authorities have tried capturing the monkeys and putting them in a sanctuary, but the monkeys easily escape and return to their old stomping grounds. When they hear the sounds of a langur, whether it’s a real langur or a langur in a human costume, they run for cover, only to return a short while later.

Monkey: “Oh good, the langur is gone. The city is ours again.”

First monkey: “Okay, but try to be nice to them this time. Don’t bite the hand that feeds you.”

Second monkey: “Sure, no problem. I’ll just bite the other hand.”