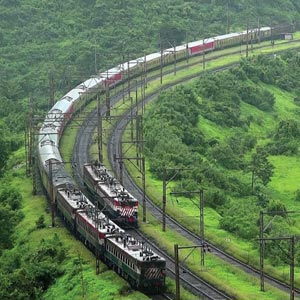 One of my favorite trips in the last decade was a ride on the Shatabdi Express from Chennai to Bangalore. I loved looking out the window at the beautiful scenery. Well, not all of it was beautiful— just the parts where people were at peace with nature and not answering its call.

What I also loved about traveling by train was having plenty of room to stretch my legs and being able to walk around whenever I wanted. I was even able to switch seats and get a scrumptious meal served to me twice.

I’d never do that on a plane, of course. Getting airline food served to me once is bad enough.

You can probably guess that I’m not crazy about flying. Even if I’m lucky enough to have a window seat, most of the flight is usually at such a high altitude that all I can see are clouds—and perhaps Mukesh Ambani’s house.

Traveling by plane also means that I have to get to the airport a couple of hours early and go through the security checkpoint, where I’m often “randomly selected” for extra screening.

Flying is safer than any other form of transportation—that’s what the statistics show—but I can’t help feeling a little uneasy whenever a plane takes off or lands, especially if I happen to be on it.

The problem, of course, is that every time something goes wrong with a commercial airliner, it gets a lot of media coverage. Even if a passenger misbehaves and causes a plane to make an unscheduled landing, it’s considered newsworthy. “BREAKING NEWS: Passenger Booted Off Air Canada Plane. Prime Minister Urges Canadians to Remain Calm.”

If a plane crashes or goes missing, it’s often the biggest news story in the world, with the 24-hour news networks giving it wall-to-wall coverage, aside from an occasional break, perhaps, to tell us if Kate Middleton is expecting another child.

When the media goes crazy like that, it’s easy to ignore the statistics and feel much safer travelling as close to the ground as possible. For me, that usually means driving—it’s how I prefer to travel when a train ride isn’t possible and there’s no water around for a ship.

I’ve never actually traveled by ship, but hope to do so one day. It will probably be a short trip aboard a cruise ship. I can’t imagine spending months on a ship, as many people did in the past.

A century or so ago, it wasn’t uncommon for people to board a ship in India and arrive in North America about two months later. And you know what the most amazing aspect of this was? Many people made it all the way to America without watching a single movie!

Yes, they had no video monitors or computers to entertain them. They had to read books or play games or even—here’s the truly astounding part—talk to each other.

These days, travelers can barely sit in the waiting room of an airport without needing some form of electronic stimulation. And when they finally arrive at their destination and meet their loved ones, they often have to answer questions related to entertainment.

“What movies did you watch on the plane?”

“First I watched Bang Bang, then I watched Jai Ho, and finally I watched Action Jackson.”

“Just three movies? What did you do the rest of the time?”

“Did you look out the window and admire the scenery?”

“I didn’t have a window seat, but I did admire the scenery. Did you know that Action Jackson was partly filmed in Austria?”