FUN TIME: Adult Prices for Children at the Buffet 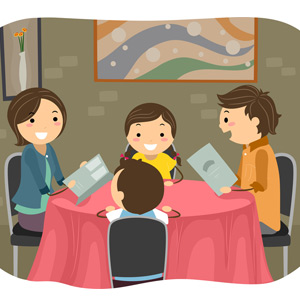 On a recent Friday, my wife and I decided to have lunch at an Indian restaurant near our home, one that offers an all-you-can-eat buffet. I like their buffet because it’s usually stocked with a variety of food, mostly South Indian dishes but also a few North Indian items. The buffet costs $9.99 for adults on week days, and I usually make sure I eat at least $10 worth of food.

Because we were taking our three children along, I called the restaurant to ask about their buffet price for kids. “$3.99 for children,” I was told over the phone. That seemed quite reasonable, especially since my children aren’t big eaters. It’s almost impossible to get two of them to finish what’s on their plates, unless they’re eating pizza or pasta. They must have been Italians in a previous life.

When we arrived at the restaurant, the pricing didn’t seem so reasonable any more. A waiter told us that the $3.99 price applied only to children aged 7 and under. Anyone 8 and older had to pay the adult price.

“How old are your children?” the waiter asked.

It didn’t work. I couldn’t convince him that my daughters, aged 10 and 11, should be charged the children’s price. Quite upset about this, I berated him and another waiter—and anyone else who looked like they might be restaurant employees.

They didn’t deserve to be rebuked, of course. After all, they weren’t the ones who set the prices. The owner of the restaurant is whom I should have been lambasting, if only he’d been around. He was probably sitting in his office at the back, tapping the keys of his calculator, figuring out how many children would need to eat at the buffet for him to retire to the Bahamas.

We promptly left the restaurant—my wife was rightfully embarrassed by my outburst—and headed to a nearby Vietnamese place. It had no buffet, so we ordered off the menu and didn’t worry about overpaying for our children.

My older daughter will soon turn 12 and, whether I like it or not, we’ll be paying adult prices for her at almost all restaurant buffets. It’s widely believed that 12 is the magical age when a child begins to put away as much food as an African bush elephant. The food bill in our household will practically double in a few years, when both my daughters hit their teen years and discover the joy of eating.

The typical teenager’s mouth, as various scientific studies have shown, is open for more hours in a day than it’s closed. If teenagers aren’t talking, singing, chewing gum, or eating, they’re sleeping with their mouths open.

Some teenagers just walk around with their mouths wide open. As any good scientist will tell you, this is a natural reaction of the human body to protein deprivation, a way of communicating this dire need to parents, as well as potentially catching a flying insect or two.

It’s during the teen years that children tend to grow the fastest. One week, your daughter barely reaches your shoulder; the next week, she’s saying, “Dad! You’re going bald!”

Teenagers need to consume tons of food to get the calories they need for their growth spurts. That’s why, when it comes to charging teens, I can’t help but sympathize with restaurants. If I were a restaurant owner, I’d put up signs all over my restaurant to deal with the issue of charging teens: “Walk slowly. No charging to the buffet!”