Home > Magazine > ChaiTime > FUN TIME: Being a Lookalike Can Be Lucrative

FUN TIME: Being a Lookalike Can Be Lucrative 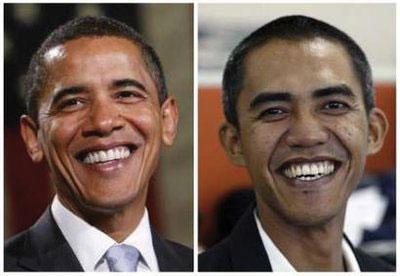 The other day, a friend of mine showed me a photo of himself with Barack Obama at a corporate event – at least that’s what he wanted me to believe. But I could tell, with a closer look, that it wasn’t Obama. It was a lookalike. He had the same eyes, nose, mouth and hair as the president, but didn’t quite have the presidential ears.

Nevertheless I was impressed with the resemblance and wondered if the Obama lookalike ever goes too far in fooling people. Does he sign autographs wherever he goes? Does he get free meals at expensive restaurants? Does he hold a press conference and challenge Vladimir Putin to a boxing match?

Being a presidential lookalike isn’t always a good thing, of course. He might find himself dodging rotten eggs hurled by a group of Republicans. He might have to answer complicated questions about Obamacare, the president’s health insurance program. And worst of all, he might find himself the target of some of those gun-toting nuts. “Hey look, it’s Obama. He doesn’t have any bodyguards. Let’s get him!”

Saddam Hussein, the ousted Iraqi leader, was known to employ a number of doubles. That’s how he managed to escape several assassination attempts. The doubles were not so lucky, of course. They must have felt cursed. “Dear God, if you felt compelled to make me look like a famous figure, why did it have to be a contemptible tyrant?”

Better to look like a beloved leader, even if he’s deceased. Just ask a man named Thyagarajan in Tamil Nadu who looks like the late actor and chief minister M. G. Ramachandran (known to everyone as MGR) and has been in demand during the election season.

“I have already been booked by five people,’’ Thyagarajan told BBC Hindi.

MGR passed away in 1987, but whatever influence he has on many Tamils has seemingly not disappeared. That’s why his image still appears on many murals and posters and why candidates in Tamil Nadu’s elections have hired Thyagarajan.

“I stand beside the candidates when they go in their open jeep. I wear the red tie that MGR, invariably, wore. I wear the dark glasses that MGR always wore. I wave at the crowd that gathers. If people come and shake hands with me, it means that I have made my presence felt,’’ Thyagarajan said.

As BBC Hindi reported, Thyagarajan is managed by Satish Kumar, whose company, Every Second, offers not one, but three MGR lookalikes. The company also offers lookalikes of other major politicians, including Chief Minister Jayalalitha. She was MGR’s leading lady in 25 films and his off-screen mistress, but despite that, there have been no sparks between her lookalikes and his. (Unless they are meeting in secret, which would be quite apt.)

Being a lookalike is an increasingly lucrative profession. Thyagarajan used to earn up to 3,000 rupees per appearance, but now makes about 5,000 rupees for a one-day campaign event. That’s pretty good money, especially if you can get away with just waving and shaking hands—and aren’t expected to give speeches and make promises you can’t keep.

Thyagarajan doesn’t show up at just political events, he’s also available for other events, such as live music shows and weddings. People love to have celebrities at weddings, even if they happen to be lookalikes.

Second guest: “Very impressive indeed. I heard that there are only 20 MGR lookalikes in the entire state. I’ve already booked one of them for my wedding. Sachin Tendulkar is also making an appearance.”

First guest: “You hired a Sachin lookalike? Wow, lucky you.”