Home > Magazine > ChaiTime > Good Sports: ANOTHER MEDAL FOR THE PHOGATS

Good Sports: ANOTHER MEDAL FOR THE PHOGATS 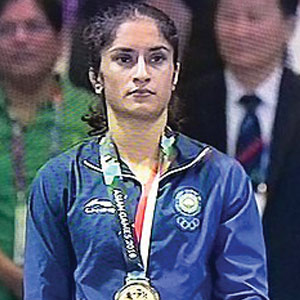 India won 69 medals at the recent Asian Games in Indonesia, more than its previous best medal haul of 65 at the 2010 Asian Games in China. Among the medalists was 24-year-old wrestler Vinesh Phogat, who won a gold medal in the 50 kg freestyle category, becoming the first Indian woman wrestler to win gold in the Asian games. She also won gold at the 2014 and 2018 Commonwealth Games.

Vinesh is a first cousin of Geeta Phogat and Babita Kumari, whose story was told in the hit movie Dangal, starring Aamir Khan as their father, Mahavir Singh Phogat, a former wrestler. Vinesh was raised by Mahavir after her father, Rajpal, passed away when she was 9.