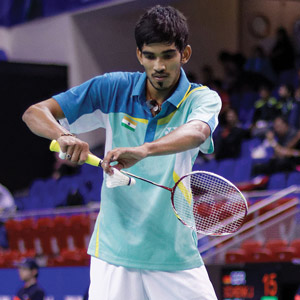 When India’s Srikanth Kidambi, the 11th ranked badminton player in the world, took the court against China’s Chen Long in the Australian Open final, his prospects of winning didn’t look good. Long, the Olympic and two-time world champion, had beaten Kidambi in all five of their previous matches. But Kidambi didn’t let the pressure get to him and stunned Long 22-20, 21-16.

“I was not thinking of winning or losing. I missed competitive badminton during my break last year and wanted to enjoy the match,” Kidambi told AFP.

A stress fracture in his right ankle caused him to miss three months of competitive play last year, but he has returned to his 2015 form, when he rose to No. 3 in the world.

A week before winning the Australian Open, he won another Superseries title, the Indonesian Open. In both tournaments, he beat South Korea’s Son Wan Ho, the top-ranked player in the world. He has improved his ranking to No. 8 in the world, and is one of the favorites in the upcoming BWF World Championships in Glasgow, Scotland.