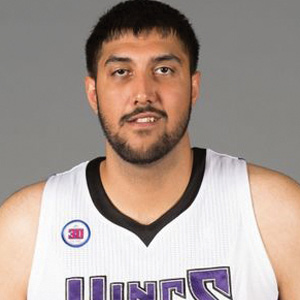 Sim Bhullar, the seven-foot-five center from Toronto, made history last August when he signed a contract with the NBA’s Sacramento Kings, who are owned by Mumbai-born Vivek Ranadivé. Bhullar became the first player of Indian descent to sign with an NBA team.

But he did not make the cut for the regular season roster and instead joined the Kings’ D-League affiliate Reno Bighorns.

On April 2, the 22-year-old Bhullar signed a 10-day contract with Kings, becoming the first player of Indian descent (“TFPOID”) to appear on an NBA team’s regular season roster. On April 7, when the Kings played the Minnesota Timberwolves, Bhullar came off the bench for 16 seconds and become TFPOID to play in an NBA game. On April 9, he scored two points against the Utah Jazz, becoming TFPOID to score in an NBA game. He also grabbed one rebound in the game, becoming TFPOID to do that. On April 10, he recorded an assist and a block against the Oklahoma City Thunder, making history two more times.

His 10-day stint with the Kings allowed him to make lots of history, but he still has more history to make. Perhaps next season, he'll become the first player of Indian descent to dunk in an NBA game, first to score a winning basket, and of course, first to foul out of a game.