Good Sports: Coaching Them to Catch 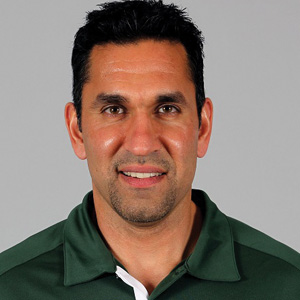 When the New York Jets hosted the Oakland Raiders in the first game of the 2014 NFL season, Sanjay Lal got a chance to help his new team beat his old team. Lal, believed to be the first NFL coach of Indian descent, is in his third season as the wide receivers coach of the Jets, joining the team after five years with the Raiders. He was the Oakland’s quality control coach for two years and wide receivers coach for three.

Lal, 45, who was born in London, was a wide receiver in college, playing for the University of Washington and helping the Huskies win the 1992 National Championship. A Huskies Hall of Fame selection, he had been a walk-on receiver at UCLA for two years before transferring to Washington.

He was good enough to be invited to NFL camps, but hamstring injuries derailed his career. He turned to coaching and spent 11 years at the high school and college level before landing a job with the Raiders.

It hasn’t been easy, coaching wide receivers in the NFL. Both the Raiders and Jets have lacked for talent at the position in recent years. But the Jets’ signing of free-agent wide receiver Eric Decker could help Lal hold onto his job. Lal told ESPN that he was impressed with the different ways that Decker, who caught 87 balls from Peyton Manning last year, managed to get open. “He always had something in his back pocket to get loose,” Lal said.