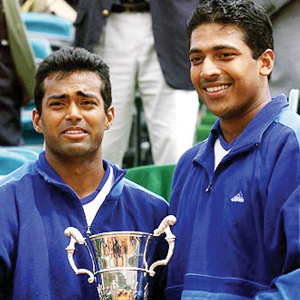 Leander Paes, one of India’s greatest tennis players, won 18 grand slam doubles titles during his long career, while Mahesh Bhupathi wasn’t far behind, winning 12. As partners, they reached the finals of all four grand slam tournaments in 1999 and were victorious at the French Open and Wimbledon. The Paes-Bhupathi pairing seemed to have the makings of one of the greatest partnerships in tennis history.

But they would win only one more grand slam title together, as tales of their tepid relationship and onagain, off-again partnership filled the pages of Indian newspapers.

A new seven-part docuseries called “Break Point,” streaming on Zee5 in India, reunited the former partners during an 18-month production period, as they watched old matches, relived their triumphs and delved into the mistrust and misunderstandings that pushed them apart.

The docuseries allowed them to come together.