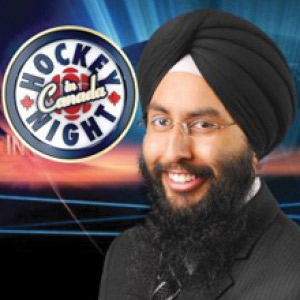 For several years, play-by-play announcer Harnarayan Singh and analyst Randip Janda have been providing National Hockey League commentary in Punjabi from a studio in Vancouver, winning many followers in the Indo-Canadian community. But this season, thanks to social media, Singh’s best calls have gone viral, as millions of hockey fans in North America who don’t speak a word of Punjabi have flipped over his unrestrained enthusiasm.

Most notable was the “Bonino! Bonino! Bonino!” call in which Singh yelled the name of Pittsburgh Penguins center Nick Bonino ten times in a rapid-fire burst after he scored a goal in the Stanley Cup Finals. Fans everywhere were soon sharing and raving about the call.

Singh and Janda, who sometimes play Bollywood and other music during their commentary, have coined a number of phrases, such as referring to the penalty box as the “box of punishment” and the hockey puck as “aloo tikki.”