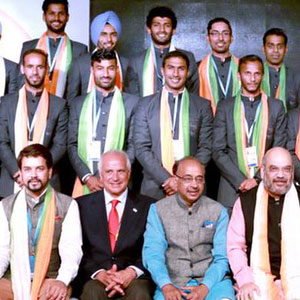 (Left) Cheering on some of the Indian athletes who are going to the Olympics in Rio: BJP National President Amit Shah and Sports Minister Vijay Goel with Indian men's hockey team members after the announcement of the team for Rio Olympics 2016.

India is sending 111 athletes to the Summer Games in Rio, its largest delegation ever. That’s a 34 percent increase over the 83 athletes who competed at the 2012 Games in London, a squad that brought home India’s biggest Olympic haul: six medals—two silver and four bronze.

Sports officials are hoping for at least 10 medals this year, a goal that seems realistic, considering the recent success in shooting, boxing, and wrestling. It’s certainly a welcome change from the barren period, not so long ago, when winning a single medal was a major achievement.

While India has won a total of 26 medals in its history, the Indian team came home empty-handed six times, including from three consecutive Games: ‘84, ‘88, and ‘92. Those were the days when we wished that fourth-place finishers, such as P.T. Usha in the 400-meter hurdles in ‘84, could receive a medal of some sort, whether copper, tin, or aluminum.

So even if the double-digit goal isn’t achieved, there are likely to be many moments to cherish at Rio for fans of the Indian team.