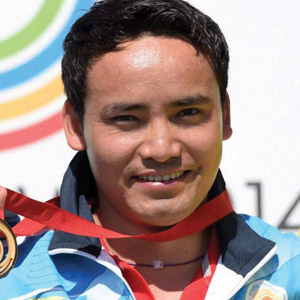 Ace shooter Jitu Rai was named “Sportsperson of the Year” at last month’s Times of India Sports Awards, a well-deserved honor for an athlete who won an unprecedented seven medals last year.

His medal haul included two silvers and a gold at the ISSF World Cup in Munich, making him the first Indian to win multiple medals at a single World Cup. He also won gold medals in the 50-meter pistol category at the Commonwealth Games in Glasgow, Scotland, and the Asian Games in Incheon, South Korea. The 27-year-old Nepali native, who will represent India at the Olympic Games in Rio next year, is hardly resting on his laurels. As he told DNA last year, “Now is not the time where I will be satisfied with how much I have done. Now is the time to look forward to the next tournament.”