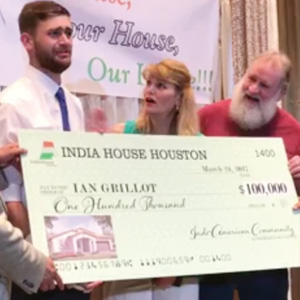 Ian Grillot was shot while trying to stop a 51-year-old man who opened fire on two Indian-American engineers in a bar in Olathe, Kansas, on Feb. 22. One of the engineers, Srinivas Kuchibhotla, 32, was killed, while his friend Alok Madasani was critically injured.

The Indian-American community in Houston recently honored Grillot as "A True American Hero" and presented him with $100,000 to help him buy a house.

India House Houston, a nonprofit organization that aims to unite cultures and create bridges, raised the money through an initiative supported by Dr. Anupam Ray, the Consul General of India in Houston, according to a PTI report.

"I don't know if I could've lived with myself if I wouldn't have stopped or attempted to stop the shooter because that would've been completely devastating," said Grillot, who accepted the award at the 14th annual gala of India House Houston.

India's Ambassador to the U.S. Navtej Sarna presented the check to Grillot. "He is a young man who has shown exceptional courage, strength of very fundamental human values," Sarna said. "No amount of honor that India or the Indian Americans bestows on him will be recompensed enough for that moment of exceptional fortitude and character."