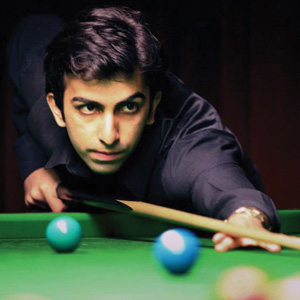 In 2005, Advani won world titles in both the timed and points format, the first cueist to ever do so. He won dual titles in 2008 as well. Only 27, he has a chance to become an all-time great.

“It is a noteworthy event when an Indian wins a world title and more so when two of them do so at a World Championship,” Prime Minister Manmohan Singh said in a congratulatory message to Advani and Shah.

Links:
Khabar's previous report on this sportsman was in May 2012:
http://www.khabar.com/magazine/chaitime/good_sports_advani_snookers_them_all

For good details on all these statistics, see "Pankaj Advani: Eighth World title and more to come"
in CanIndia, October 30, 2012
http://canindia.com/2012/10/pankaj-advani-eighth-world-title-and-more-to-come/