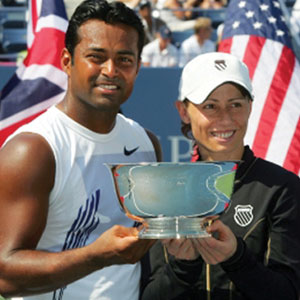 A decade later, Paes became the oldest man (40 years, 2 months) to win a Grand Slam title when he and his Czech partner Radek Stepanek won the men’s doubles title at last month’s U.S. Open, easily beating Alexander Peya and Bruno Soares 6-1 6-3. It was the 14th Grand Slam doubles title of his career, which, combined with his 1990 Wimbledon junior singles title and his bronze medal at the 1996 Atlanta Olympics, makes him arguably the greatest Indian tennis player ever.

His former partner, Martina Navratilova, was one of the first to congratulate him after his win. “She is one of my best friends on the tennis circuit and a great teacher, a great teammate and a real confidante for me,” Paes told NDTV. “She actually holds the record for being the oldest female athlete to win a Grand Slam in the Open era. Having won the U.S. Open now, it is quite unique that as two best friends and teammates, we both hold the record. Age is just a number and I have learnt from Martina how a good, healthy, quality lifestyle in any field can help you achieve excellence.”