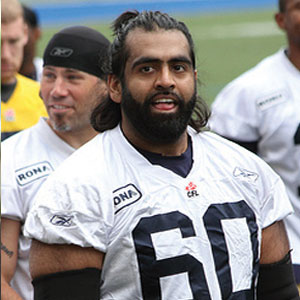 Back in 2009, there were three professional football players of South Asian origin in North America—and many sports fans didn’t even realize it. Brandon Chillar was a linebacker for the NFL’s Green Bay Packers, Bobby Singh was a guard for the Canadian Football League’s British Columbia Lions and Ibrahim “Obby” Khan was a center for the CFL’s Winnipeg Blue Bombers.

It might have been the golden era of brown-skinned football players (we’ll surely see more desi players, but perhaps not three at the same time) and it ended in late April when Khan, the last of the trio to play, announced his retirement.

The 6-foot-3, 270-lb Pakistani-Canadian played eight years in the CFL, while Chillar played seven in the NFL and Singh managed to have a 10-year career in three leagues: NFL, XFL and CFL. Perhaps the Elite Football League of India (EFLI), launching this year with a dozen teams playing American football (and Chillar as one of its financial backers), isn’t such a crazy idea after all.