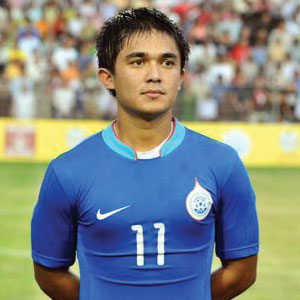 It might be a sign of how far India has to go to compete with soccer-rich nations. Sunil Chhetri, India’s captain, has signed a contract with Sporting Lisbon’s reserve squad and will play in Portugal’s second division. Just a couple of years ago, he had signed with Major League Soccer’s Kansas City Wizards (now known as Sporting Kansas City) and big things were expected of him. But he made no impact there and followed that up with a dismal stint with Kolkata’s Mohun Bagan. Now he has joined the Portuguese team and seems excited about the opportunity.

“I feel like a 14-year-old kid,” he told Mail Today. “It’s a massive opportunity. For me it’s going to be more difficult as I am from a country that’s ranked 163 and I will play in a country that’s No.5 in the FIFA rankings.”

If that quote sounds familiar, he said something similar in 2010 when he signed with the Wizards: “I’m looking forward to the opportunities I’m going to get. Coming from a nation ranked number 132 in the world to one in the top 20 is a great move. I’m going to give my best in training everyday.”

Don’t be surprised if Chhetri moves to another country next year—one that’s ranked even higher than Portugal.