IF OBAMA’S TREE COULD TALK 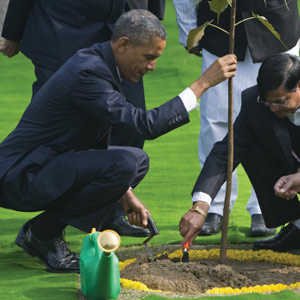 During his recent visit to India to be the chief guest at the Republic Day parade, President Barack Obama planted a peepal tree at the Raj Ghat memorial to Mahatma Gandhi in New Delhi. The tree, also known as Ficus Religiosa or sacred fig, had more than two dozen leaves, but a few weeks later, all those leaves had dropped off.

Had it been just another tree planted by an ordinary man, no one would have raised an eyebrow. But this tree was imbued with symbolism, so the media began to ask questions, determined to get to the bottom of this. After all, if the tree that Obama planted was dying, what would it mean for all the other things he had touched? Would his health care reform, popularly known as Obamacare, also be doomed?

B.C. Katiyar, a top regional government horticulturist, and other officials visited the tree and, like doctors discharging a patient from the hospital, declared it to be in good health.

“It’s a seasonal phenomenon,” Katiyar told the AP. “It will send out shoots within the next 10 days.”

The media seemed satisfied with the response, but I’d like to interview the tree itself.

Me: “Are you healthy otherwise?”

Tree: “My roots are a little wet. They’re giving me too much water. Please tell them I’m a tree, not a fish.”

Me: “I think they’re trying to make you grow.”

Tree: “They’re putting too much pressure on me. The gardener keeps whispering to me, ‘You were planted by Obama—you need to grow.’ Who the heck is Obama?”

Me: “The president of the United States.”

Tree: “The president of the United States planted me? Doesn’t he have better things to do?”

Me: “He planted you here as a tribute to a great man named Mohandas Gandhi.”

Tree: “Thanks a lot! That’s just what I needed: more pressure on me.”


[Comments? Contributions? We would love to hear from you about Chai Time. If you have contributions, please email us at melvin@melvindurai.com. We welcome jokes, quotes, online clips and more.]