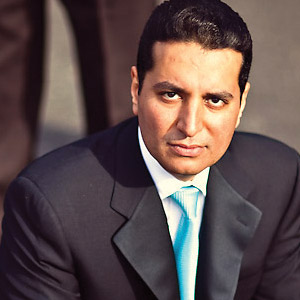 NEGANDHI FACTS
Born in Phoenixville, Pa., a suburb of Philadelphia, Negandhi graduated from Phoenixville High School, and then went to Temple University to study communications. While at Temple, he served as sports editor for the university newspaper and was a reporter for a local high school sports show on Fox.

After graduating in 1997, he became one of the first Indian Americans to be a local sports anchor, joining KTVO-TV in Kirksville, Mo. In 1999, he moved to WWSB-TV in Sarasota, Fla., where he worked until 2006 (with a one-year break to take care of family matters). That’s where he met his wife, Monica Buchanan, who’s now a reporter for NBC Connecticut.

Negandhi joined ESPN in September 2006 as an anchor for ESPNEWS. Two year later, he achieved his dream: hosting SportsCenter, the first South Asian to do so.

NEGANDHI BY THE NUMBERS

3 Associated Press awards he has won

14 Age when he started dreaming of working for ESPN

“Fortunately my parents were open-minded and supportive—though they definitely thought (sports journalism) was a phase. Dad wanted me to go into politics and Mom wanted me to become a lawyer.” ( India Currents)

“You gotta just be yourself. If you're not yourself, the audience will figure it out.”(SajaForum.org)

“I knew I had to break stereotypes of being an Indian American doing sports on TV because there are not many of us out there. It made me work that much harder because nothing was handed to me. That’s what makes it all the more rewarding.” (SajaForum.org)

NEGANDHI ON THE WEB

Negandhi interviews Temple University running back Bernard Pierce on the set of SportsCenter.