Lessons in Naming a Business 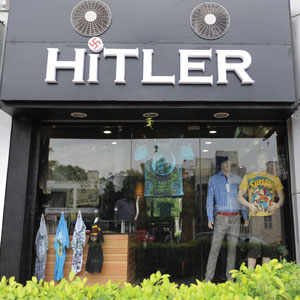 If you’re in the process of naming a new business, you may want to stay away from “Hitler.” That may seem obvious, but not to the owners of a new clothing store in Ahmedabad, India. Co-owner Rajesh Shah expressed surprise that anyone would object to the name.

“We had put up a cloth banner for over a month saying ‘Hitler opening shortly’—no one objected to the name then,” Shah told the Times Of India. “Hitler was a nickname given to my business partner Manish Chandani’s grandfather because of his strict nature. Frankly, till the time we applied for the trademark permission, I had only heard that Hitler was a strict man. It was only recently that we read about Hitler on the internet.” After facing pressure from the Jewish community and the state of Israel, Shah and Chandani—who even dotted the ‘I’ on their store’s sign with a swastika—agreed to change the name. Perhaps they should have googled “Hitler” before naming their store. They would have discovered that “strict” is hardly the first adjective that comes to mind to describe his many atrocities. They may have also found out about the Mumbai man who opened “Hitler’s Café” in 2006—before being forced to make a change. Meanwhile, closer to home, South Carolina Democratic chairman Dick Harpootlian compared Gov. Nikki Haley to Eva Braun, Adolf Hitler’s mistress, according to The State newspaper. Speaking at a DNC convention breakfast in Charlotte, North Carolina, Harpootlian said, “She was down in the bunker à la Eva Braun,” referring to Haley’s participation in daily news briefings in a basement studio at the NASCAR Hall of Fame. (Braun’s last days were spent in a Berlin bunker with Hitler). Haley asked for an apology—and with good reason. If she lets them get away with this, what will they do next—accuse her of buying her clothes at “Hitler”?