Home > Magazine > ChaiTime > Only a Few Dollars in Their Pockets

Only a Few Dollars in Their Pockets 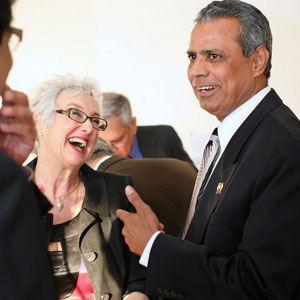 Upendra Chivukula, a member of the New Jersey State Assembly since 2002, is running for the U.S. House of Representatives this November. According to the bio on his website, Chivukula was born in Nellore, India, lived in a hut with his parents, grandmother and five siblings, and by working hard at his studies, earned a bachelor’s degree in electrical engineering from Anna University in Chennai. “With only a few dollars in his pocket, Upendra immigrated to the United States in 1974, and received a Masters Degree in Electrical Engineering from City College of the City University of New York,” the bio states. If you’re planning to be successful in America, arriving with only a few dollars in your pocket seems to be the way to go.

It worked for Digvijay Chauhan, co-founder and CEO of SeeYourImpact.org. “With only a few dollars in his pocket, Digvijay traveled to Seattle from India 20 years ago to attend graduate school at Seattle University,” the organization’s website states. “He had no Plan B in mind. Happily, it all worked out and Digvijay went on to a successful career at Microsoft before co-founding AskMe, and now SeeYourImpact.org.”

It worked for Ashok Khare, a special assistant in Pennsylvania’s Department of Community and Economic Development, who, according to Times of India, has come “a long way from the late ’60s when he entered the American coast with only eight dollars in his pocket.”

It also worked for Prince Niyyar, president of Commdex Consulting in Norcross, Ga., a winner of Gwinnett Chamber’s 2011 Pinnacle Small Business Awards. According to the awards site, “Commdex—a wireless systems integrator specializing in design and implementation of wireless solutions—is a true American entrepreneurial success story starting with Prince coming to America from his native India with only a few dollars in his  pocket.” But what if you have fifty bucks in your pocket? Can you still be successful? Apparently so. According to the website ShrinkRapRadio.com, Dr. Rakesh Sarin of the UCLA Anderson School of Management “came to the United States with only fifty dollars in his pocket, but with a lot of enthusiasm to pursue his PhD degree at UCLA.” Compiled and partly written by Indian humorist MELVIN DURAI, author of the novel Bala Takes the Plunge.
[Comments? Contributions? Please email us at melvin@melvindurai.com. We welcome jokes, quotes, online clips, and more.]