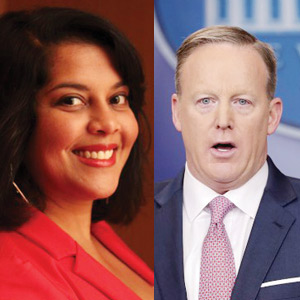 Not everyone can get a press pass for the White House, so when Shree Chauhan, founder and CEO of the nonprofit Parents in Partnership, spotted White House Press Secretary Sean Spicer at an Apple store recently, she realized she had a rare opportunity to pepper him with questions.

“How does it feel to work for a fascist?” “Did you help with the Russia stuff?” “Have you committed treason, too, just like the president?” and "Do you feel good about lying to the American people?" were some of the questions she flung at him.

Chauhan, 33, wrote about the experience in a blog entry and shared a video of the confrontation online. Spicer's response isn't perfectly clear from the video, but she claims that he said, "Such a great country that allows you to be here."

"That is racism and it is an implied threat," she said. "Think about the sheer audacity of Mr. Spicer to say that to my face with a smile, knowing that he is being recorded on video and the position of power he holds in our government."

Though she received criticism from some quarters for verbally attacking the press secretary while he was shopping, she considers his response unwarranted.