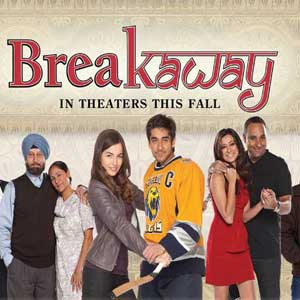 The movie Breakaway, released in India as Speedy Singhs, has propelled a young Indo-Canadian actor into the limelight. His name is Vinay Virmani and he not only wrote the script, but also auditioned for the lead role and won it.

The movie, which also stars Rob Lowe, Russell Peters and Anupam Kher, is a cross-cultural musical drama that follows 21-year-old Rajveer Singh (Virmani) as he attempts to become a professional hockey player, against the wishes of his father (Kher), who wants his son to devote himself to his Sikh religion and the family business.

It sounds like a good story (Canada’s version of Bend it Like Beckham) but the movie has been widely panned by critics and Virmani hasn’t received plaudits for his acting. “He is somewhat earnest and knows how to smile for the camera,” wrote Aseem Chhabra in Mumbai Mirror. “But he needs serious acting training and a long way to go before he will be considered an actor in Canada or in India.”

That may be the case, but Virmani has something that many aspiring actors lack: a rich dad. His father, Ajay Virmani, president and CEO of Cargojet, Canada’s largest cargo airline, is one of the movie’s producers. And his father’s friend, Bollywood star Akshay Kumar, is an executive producer. So when young Virmani auditioned for the lead role, he probably didn’t need to say much -- other than perhaps “Hi Dad!”