COVID-19  In-depth info for Indians in Atlanta/Georgia. Click here
Home > Magazine > ChaiTime > SATIRE: Excuse Me While I Catch Up on My Sleep

SATIRE: Excuse Me While I Catch Up on My Sleep 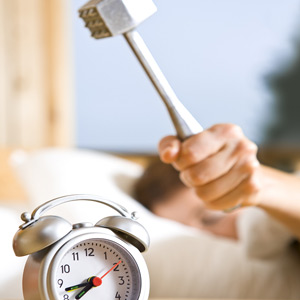 Most people love all the appliances and other devices they have in their homes. Not me. I have a love-hate relationship with them. I love most of them, hate a few of them. The device I hate the most is one that has tormented me for a long time: the alarm clock. I wish it had never been invented. Then I wouldn’t have to wake up at 6 a.m., cursing the man who invented the alarm clock, a man who unwittingly caused many of my best dreams to end abruptly. There I am, deep in slumber, giving my acceptance speech for the Nobel Peace Prize in Oslo, Norway, when I’m suddenly awoken by that annoying beep-beep-beep sound and have to face the reality that the Nobel Committee isn’t going to recognize me for negotiating peace between my wife and my mother.

The adjustable mechanical alarm clock, as you may know, was invented in 1847 by a Frenchman named Antoine Redier, who, according to his biography, “did not enjoy sleeping and was deeply envious of people who did.” I wish I could go back in time and tell Redier to invent something else, perhaps a device to help people sleep longer. Such a device would be quite useful in my household, especially on Saturday mornings, when my wife often wakes up earlier than she wants to, sometimes as early as 5 a.m. She promptly gets out of bed, complaining that she wishes she could sleep longer. Her complaining wakes me up, my complaining wakes the kids up, and their complaining almost wakes the dog up.

It takes a lot more than that to awaken our dog, of course. Even if a burglar enters our house, she will bark at him only once or twice, then go back to sleep while he makes off with our valuables. You’d almost think that she’s deprived of sleep, but she gets the most sleep in our family, probably about 20 hours a day, not including naps. I keep telling her that she’s sleeping away the best years of her life, but she doesn’t listen. She just opens her eyes briefly to see if I’ve got some food for her and then goes back to sleep.

I wish I could get half as much sleep as she does, but I usually go to bed at midnight and fall asleep about 15 to 30 minutes later, depending on how long it takes my wife to give me her lecture on the importance of sleep. She’s right about that, of course. I do need more sleep. Adults are supposed to get between seven and nine hours of sleep a night, according to sleep experts at the National Sleep Foundation. I tried to get more information on the benefits of sleep, but when I called the sleep foundation, all I got was a recording that said, “All of our experts are currently asleep. Please stay on the line until one of them is awake.”

It would be easier for me to get more sleep if I didn’t have so many distractions at night. The internet is the biggest distraction. There is always an interesting article to read or a funny video to watch. If it’s not the internet, it’s the quality programming on TV that keeps me from going to bed. Just as I’m ready to turn it off, a network promo will entice me: “Tonight on the David Letterman Show, stupid pet tricks.” And I will have no choice but to stay awake to see how stupid these tricks are.

The problem, of course, is that there are no promos enticing me to go to bed. Not once have I heard a voice that says, “Tonight, in your dreams, the Nobel Committee will award you the Nobel Peace Prize for negotiating peace between your dog and the car next door. Hurry to bed fast—before the committee awards the prize to someone more deserving, such as Vladimir Putin.”