Satire: Wanted: A Good Home for a Chicken 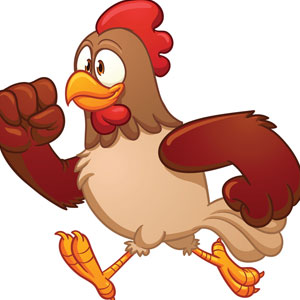 Anyone want to adopt a chicken?

Hundreds of chickens are being dropped off at animal shelters and sanctuaries around America every year, according to an NBC News article. Chickens, as you know, make really good pets: they don’t need much food, they don’t require you to take them for walks, and they easily fit in a small space, such as between the two metal racks in your oven.

The NBC News article states that about 225 former backyard chickens are awaiting new homes at three shelters operated by Farm Sanctuary—and many more are also seeking adoptive families at other shelters around the country. The good thing about adopting a chicken is that it doesn’t involve as much paperwork as adopting a turkey. I tried to adopt a turkey last November, but there were just too many other families interested in giving the turkey a good home. It probably didn’t help my chances that when the shelter worker asked me, “Do you have any experience with turkeys?” I felt compelled to share my favorite turkey recipe.

This year, I might try to adopt a chicken. I called the bylaw officer in my city to ask if they allow residents to have chickens and he said sternly, “No backyard chickens permitted!” So if I get a chicken, I’m going to have to keep it in my front yard. I don’t mind that at all, but my neighbors might complain. Neighbors can be such hypocrites. They don’t want to see a bird in my front yard, but have no problem putting a bunch of plastic pink flamingoes in theirs.

Truth is, my wife and I have talked about having several chickens—not just one. We’d love to have fresh eggs from our very own layers. But we also know that it’s not as easy as it sounds. As the NBC News article points out, chickens can be “noisy, messy, labor-intensive, and expensive,” which is the same description I use when people ask about my children. The difference, of course, is that chickens produce eggs and can usually go an entire day without listening to a Taylor Swift song.

The egg-laying, unfortunately, lasts only two years or so, but a chicken may live an entire decade longer. Most chickens are unprepared for this, having set aside not a scrap toward their retirement. Thanks to humans, they’ve been left with no nest egg whatsoever.

So what becomes of them? Well, if they’re lucky, they get dropped off at animal shelters and sanctuaries, the closest thing they have to a retirement home. That’s sometimes what happens to chickens raised by city folk who thought it would be nifty to have a backyard coop, but didn’t consider all the problems, not just the noise and mess, but even the pests and predators that chickens attract, such as rats, raccoons, and nosy neighbors.

With so many birds being dropped off at her shelter, you can’t really blame her for crying fowl. But is it really such a huge problem, one that threatens the growing backyard chicken/self-sufficiency movement that has convinced many cities to allow residents to have hens and filled many neighborhoods with the sound of clucking, mostly from disapproving neighbors?

Certainly not, says Rob Ludlow, owner of the website, BackYardChickens.com. “Hundreds of thousands of people are realizing the wonderful benefits of raising a small flock of backyard chickens, the pets that make you breakfast,” he said.

Pets that make you breakfast? Somewhere in America, there’s a guy sipping a beer and yelling at a chicken, “Hey bird brain, I said I wanted pancakes and bacon, too!”

Ludlow has authored three books, including one called Raising Chickens for Dummies. It has sold so many copies that he might have to write a follow-up book: Surviving Dummies for Chickens.