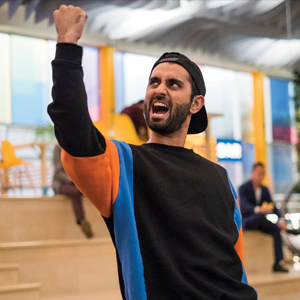 The skills you develop in high school may pay off handsomely one day. Just ask Kapil Talwalkar, one of the stars of Zoey’s Extraordinary Playlist, an NBC series about a computer programmer named Zoey who hears the innermost thoughts of people as songs.

In an interview with Ariba Bhuvad of the website The Series Regulars (TSR), Talwalkar recounted how he took up acting in high school and honed his skills at University of Southern California. During his senior year, he starred in a play called Animals out of Paper.

“It gave me a ton of confidence because people were writing good things about my work,” he said.

But becoming a professional actor was a challenge, one that involved working odd jobs for several years, including driving for Uber. He appeared in three pilots, but none were picked up by TV networks. Then in January 2019, he was asked to audition for a role on Zoey’s Extraordinary Playlist, an audition that required him to rap, sing and read jokes.

Lucky for him, he had taken singing lessons in high school. “I play piano and guitar and I wanted to be in a rock band when I was 12-13 years old,” he told TSR. “My public high school drama department didn’t have a lot of guy singers, so they asked me to sing for a part. I struggled and wasn’t getting it, so I had a lot of lessons and a lot of people helped me along the way. My strength has always been scripted comedy, so I never imagined my first major TV gig would be a singing and dancing show.”