THE COCONUT SMASHER FROM KERALA 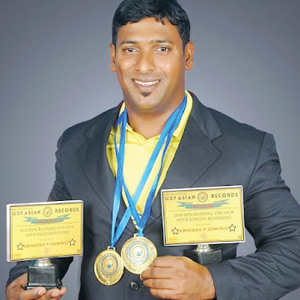 If you’re like most people, breaking open a coconut involves a tool of some sort, perhaps a hammer or cleaver. Smashing the coconut with your bare hands doesn’t seem like a particularly wise thing to do—especially if you don’t have good health insurance.

But don’t tell that to Abheesh P. Dominic of Kottayam, Kerala, who recently smashed his way into the Guinness World Records by breaking open 122 coconuts within a minute with just his right hand. The coconuts were laid out in a row and the big-armed Dominic pummeled them at a pace of more than two coconuts per second.

“I decided to break this record because I am from a remote village and Guinness World Records is only a dream for any one of us,” he said, according to the Guinness website. “I am a man of strong determination and I strongly believe in the willpower of human beings.”

Whether you believe in the willpower of humans or not, smashing 122 coconuts in 60 seconds is an incredible feat. Before Dominic came along, the world’s foremost coconut-smasher was Muhamed Kahrimanovic of Germany, who broke the record five times, eventually reaching 118 coconuts in 2011.

You may be proud to learn that India holds another coconut-smashing record: Most coconuts smashed around a person, blindfolded, in one minute. Blindfolded Kawaljit Singh used a hammer to smash 35 coconuts that were placed around the body of Karamjit Singh, who was lying down.

Please don’t try that at home—even if you have a good health insurance plan.