THE FRENZY AT A PATEL BROTHERS GRAND OPENING 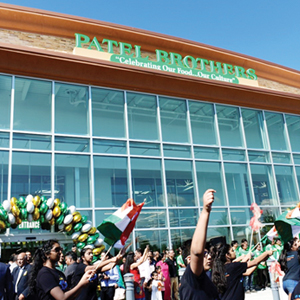 Swetal Patel, vice president of the national grocery chain Patel Brothers, won’t soon forget an incident at the grand opening of an 83,000-square-foot store in an Atlanta suburb several months ago.

“At the Suwanee opening, I was trying to give someone a cart, being a helpful person, and the elderly gentleman took his cane and hit me saying, ‘Hurry up and give me my cart!’” Patel told Chicago Tribune reporter Louisa Chu.

Being hit by a cane is an unusual occurrence, but the frenzy at Patel Brothers’ grand openings is something that Patel and his family are accustomed to. After starting with one store in Chicago in 1974, they now have 53 around the country.

As Chu reported, the recent grand opening of a Patel Brothers store in the Chicago suburb of Niles drew thousands of people, some waiting outside in the rain for two hours. Private security and local police were needed to control the crowd. Even so, some shoppers were involved in a fight over shopping carts.

Special sales and free samosas attracted many to the grand opening.

Chu found it challenging to shop during the grand opening. “Fellow shoppers tried to take my green store cart a few times, while it was filled, with me holding on,” she wrote.