THE TRUDEAUS GO TO INDIA 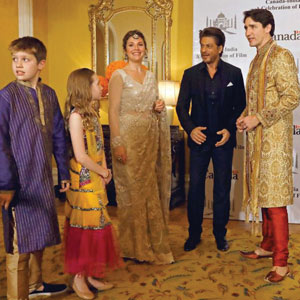 It was an official visit, but also a vacation: Canadian Prime Minister Justin Trudeau recently spent seven days in India with his wife Sophie and their three children. The visit didn't go quite as planned, as Prime Minister Modi seemed to give them the cold shoulder, acknowledging their presence only after five days—just before the official welcome at Rashtrapati Bhavan in New Delhi.

Another controversy was sparked when Jaspal Atwal, an Indo-Canadian man who served five years in prison for the attempted murder of an Indian cabinet minister in 1986, was invited to a reception with Trudeau. The invitation was quickly retracted, but Atwal appeared in a photograph with Sophie Trudeau, causing much consternation.

But what provoked the most commotion in social and other media was the Trudeau's choice of attire. Wearing modest as well as showy Indian clothing on almost every occasion, the Trudeaus were accused of cultural appropriation and "trying too hard" to impress their hosts.

"Is it just me or is this choreographed cuteness all just a bit much now?" tweeted Omar Abdullah, the former chief minister of Jammu and Kashmir. "Also FYI we Indians don’t dress like this every day sir, not even in Bollywood."

But the Trudeaus did win some praise for their efforts. Responding to Abdullah, filmmaker Ashoke Pandit tweeted, "Sir if they want to pay respects to the culture of our country, why should one be disturbed? It’s a moment they want to enjoy with India and that’s it."

Author and journalist Prarthna Gahilote agreed: "All those criticizing @JustinTrudeau for making that extra effort to adopt Indian ways and clothes should really be ashamed of themselves. Here's a family who is making an effort to adopt a country they are visiting. How many of us do that? Well done Mr. Trudeau and family. You are fabulous!"