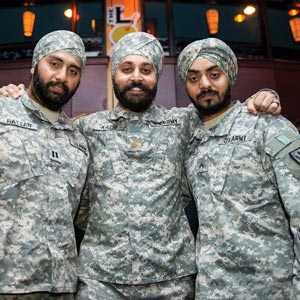 The United States military has 1.4 million active-duty service members. Out of those, only three are observant Sikh men who wear turbans and have facial hair. The trio, Captain Tajdeep Rattan, Major Kamaljeet Kalsi, Corporal Simranpreet Lamba, serve in noncombat positions in the Army and received special permission from the Department of Defense to do so.

As National Public Radio recently reported, Sikhs cannot ordinarily serve in the military because of the Pentagon’s ban on facial hair and religious headgear among service members. The recent ruling by the Supreme Court that employers cannot discriminate against Muslim women who wear headscarves is giving hope to activists pushing for similar treatment of Sikhs in the military.

“What I’m anticipating with this decision is that we will have a move in this country to recognize the right of individuals from different religious backgrounds to live in an America that does not discriminate against them on the basis of how they appear,” Simran Jeet Singh, senior religion fellow for the Sikh Coalition, told NPR.

Canada and Britain are among the Western countries whose militaries do not discriminate against observant Sikhs, at least not to the extent the U.S. does.

“The U.S. military is the largest employer in the United States,” Singh said, “and if the U.S. military is openly discriminating against religious minorities, that gives a green light to employers around the country to do the same.”