The Changing Face of (Captain) America 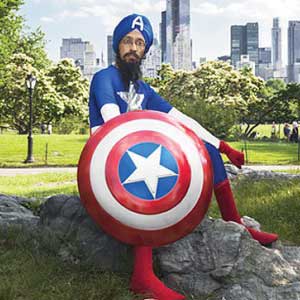 Few people would dress up as Captain America and go to a public park, especially when it isn’t Halloween. You’d get plenty of stares, perhaps even a taunt or two. And if you happen to be a skinny brown man wearing a beard and a turban, you’re bound to raise not only eyebrows, but also the ire of a few folks—those who take offense to Captain America being anything but a brawny white man.

So it took some courage for Sikh cartoonist Vishavjit Singh to visit New York City’s Central Park dressed in the blue-red-and-white costume of the Marvel Comics superhero, carrying a shield and displaying a large “A” on his blue turban. He did it during the recent Puerto Rican Day Parade, with photographer Fiona Aboud alongside to capture shots for her “Sikhs: An American Portrait” project.

As he writes at Salon.com, he undertook the experiment to “challenge the way New Yorkers think about superheroes—and bearded Sikhs like me.” As expected, he got plenty of attention. But aside from a few gibes—one man shouted “Captain A-rab,” while another yelled, “Terrorista!”—the reaction was mostly positive.

“It was the most unlikeliest of days for me,” he writes. “Hundreds of strangers came up to me. And we were able to lay to rest any anxieties or inhibitions in those moments—about other people, about the unknown, about ourselves, about violating other people’s personal spaces or not understanding their beliefs.”

Photographs of him as Captain America can be viewed and purchased at http://www.redbubble.com/ people/sikhcaptain