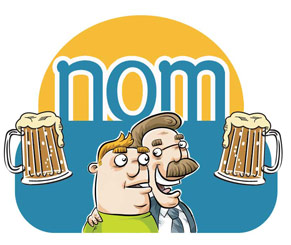 The annual meeting of the National Organization for Men (NOM) is usually held at Bubba’s Sports Bar in Pineville, Tennessee, but with almost three dozen men attending this year, it had to be moved to a more spacious location down the road: Earl’s Tire Emporium.

Luther Bramley, president of NOM, was about to address the gathering when a bearded man wearing a John Deere cap stood up. “How many women does it take to change a light bulb?” he asked. “Four. The first to read the instructions, the second to hold the step ladder, the third to screw the light bulb in, and the fourth to send out the press release.”

Everyone laughed, except a middle-aged man with long sideburns. “What’s a press release?” he asked.

“I’m not sure, Billy Bob,” the man next to him whispered, “but I think it’s when those reporters in the Middle East get freed from captivity.”

Bramley peered over the large podium, consisting of four Goodyear tires. “You’ll be surprised to know, Earl, that my wife changes light bulbs all by herself,” he said. “She doesn’t even need a step ladder—just wears a pair of her high-heeled shoes. Women are learning to do all kinds of things these days, even parallel park. That’s why we need this organization—to protect our rights, to make sure women don’t take over the world. If they start making all the laws, the next thing you know, beer and football will be illegal. And we’ll be put in prison just for leaving the toilet seat up. We need this organization to protect our rights—and also our wrongs. We’re not as big as the National Organization for Women, but we’re growing so fast, we may need to hire someone to handle our public relations.”

“I’m not sure,” the man next to him whispered, “but I think it’s when you have relations with the public.”

“It may surprise you to know that a dozen countries around the world are being ruled by women,” Bramley continued. “ Germany, Ireland, the Philippines, Argentina, Bangladesh and Liberia all have women on top.”

“It’s that darn Cosmopolitan magazine,” Earl said. “Ever since my wife started reading it, she wants to be on top too.”

“We managed to dodge a Hillary Clinton presidency,” Bramley said, “but who do you think is second in line to succeed Obama? Yes, you guessed it: Nancy Pelosi. She’s right behind 67-year-old Joe Biden. What do you guys have to say about that?”

“Women have been moving up in the business world too,” Bramley said. “You wanna know how many Fortune 1000 companies have women at the top? Almost 30 of them. For example, Indra Nooyi is CEO of PepsiCo.”

“That’s it,” Earl shouted. “I’m not paying for any more corn products.”

“I’m not sure,” the man next to him whispered, “but I think it’s someone who admires you from the rear.”

“I’m attending the third session,” Earl said, “And after that, Billy Bob and I are going to hit the town. Beer and wings are half-price at Bubba’s tonight, and we’re going to watch some great fights from the WBF: Women’s Boxing Federation. Who’s going to join us?”