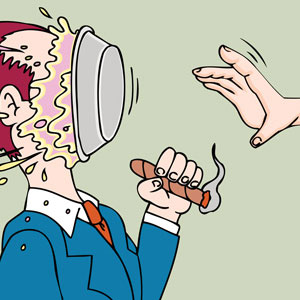 PROTECTING OURSELVES FROM FOOD

A Florida woman named Adyan Sanchez was recently arrested for allegedly throwing a plate of tamales at her boyfriend after he called her a bad word. I was happy to hear about her arrest because she committed a very serious crime. No one should be able to get away with wasting a plate of tamales.

A tamale, as you probably know, is a Latin American dish consisting mainly of masa (a dough usually made of corn) and other fillings such as meats, vegetables and chilies, which are boiled or steamed in a leaf wrapper. Tamales are delicious. If my wife ever threw a plate of them at me, I’d do exactly what Sanchez’s boyfriend did: call 911. I’d want the police to come over and charge her with tamale abuse. Then I’d pick the tamales off the floor and devour them, even if the police accuse me of eating the evidence.

Thankfully my wife, Malathi, has great respect for food. In 10 years of marriage, I don’t think she has ever thrown any food at me, unless you count the times when I did the cooking. Actually, even when my culinary skills are lacking, Malathi has somehow resisted the temptation to throw food at me. Instead, she has been very encouraging: “It’s quite tasty, honey. I’m sure the dog will really appreciate it.”

Sanchez was upset at her boyfriend, Roberto Olvero, because he allegedly called her a B-word—and it wasn’t “beautiful.” According to a report in SmokingGun.com, Sanchez was particularly miffed because Olvero called her the B-word in front of their one-year-old son. So instead she showed the boy how Mommy showers Daddy with love, affection and tamale sauce.

When the police arrived, they found the sauce on Olvero’s pants and arrested Sanchez for “domestic battery,” even after she insisted that she hadn’t thrown any Duracells at Olvero. She was taken to jail, but later released after posting a bond of 500 tamales. (Actually, it was $500. I’m not sure if there were any tamales involved.)

Throwing food at a person is a crime—that’s why the cops booked Sanchez, even if her boyfriend wasn’t hurt. It’s important to put a stop to this behavior before things get worse. Today, Sanchez might throw a tamale at Olvero; tomorrow, it might be a taco or burrito. And before you know it, their poor son might have no food to eat.

Domestic abuse of any sort is wrong, of course, and just because food is involved doesn’t mean we should take it lightly. In fact, we should take it very seriously, because not only is it wasteful, people can get injured. That’s why I was very pleased to hear that the U.S. Senate voted in favor of the Food Safety Act. It’s important for every country to have laws that protect us from food.

You may think this is an isolated crime, but just a few months earlier, police in West Virginia charged 40-year-old Larry Lacy with domestic battery for allegedly throwing a piece of bologna at his wife, Angela. According to an article in the Charleston Daily Mail, the couple was having an argument during a cookout about disciplining their children, and Larry, apparently, decided to demonstrate the proper way to do it.

Angela, who was unhurt, didn’t want her husband to go to jail, so the cops asked him to spend a night away from home instead. If I were a cop, I would have gone one step further: I would have taken away all their bologna.

If my boss caught me eating it, I would have told him the truth: “You know me, sir. I’ll do anything to protect the public.”


DID THAT REALLY HAPPEN?

1. A contestant on the CBS reality show, The Amazing Race,” visiting a public market in Bangladesh, complained that “everybody has a body odor from hell.”

2. South Asian businesses in Jackson Heights, N.Y., did not celebrate Diwali in 2010 because of wrangling among the merchants.

If you grew up reading Tintin, you’ll be glad to learn that the comic books are now available in Hindi. And you may find yourself saying, “Billions of bilious blue blistering barnacles. Why did it take so long?”

After all, Tintin books, written by Belgian author Georges Prosper Remi using the pseudonym Hergé, have been around for about 80 years and had been translated into 58 languages (including Bengali). Perhaps no one was as persistent as Om Books CEO Ajay Mago, who succeeded in translating the books despite having trouble with some phrases, including “Billions of bilious blue blistering barnacles,” a favorite of character Captain Haddock. “You're talking about something that is in the sea and there is no direct parallel of it in Hindi,” Mago told the AFP.

Indian-American Rakesh Khanna is helping to bring attention to regional authors in India. Khanna was born and raised in California, but after making several trips to India in his youth, decided to settle there. “I was largely just attracted by how complicated it is,” he told the East Bay Express in Oakland, Calif. “I started out as the dumb American cousin who couldn’t spell his own name in Hindi, couldn’t order in a restaurant, didn’t know what languages were spoken in which states, missed all the pop culture references, was scared to drive a car here or to eat panipuri from roadside stalls. I really badly wanted to be able to do all that stuff.”

Khanna, who now lives in Chennai, co-founded an independent publishing house called Blaft in 2007. The company has made a name for itself partly by translating regional pulp fiction into English, including two anthologies of Tamil pulp fiction and novels by Urdu author Ibne Safi. Says Khanna: “There are fabulous writers in all of these languages, who are generally ignored outside their linguistic community until they’re 80 years old, at which point the Sahitya Akademi—the Indian government’s literature agency—gives them a prize and publishes some of their most boring work in a poorly edited English translation with an ugly cover that’s impossible to find outside of Delhi.”