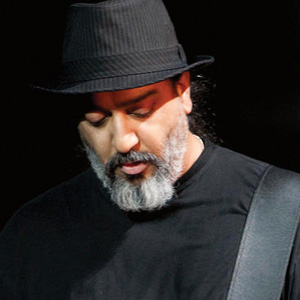 Born in Seattle to immigrants from Kerala, Thayil grew up in Park Forest, a suburb of Chicago, but returned to Seattle for college, earning a degree in philosophy from the University of Washington.

Thayil has played guitar for a number of groups, but gained fame as the lead guitarist for the grunge band Soundgarden. He founded the group in 1984 with Hiro Yamamoto, a high school friend, and Chris Cornell, a college roommate.

The first grunge band in Seattle to sign with a major label, Soundgarden produced five albums, including three that went platinum. The group disbanded in April 1997, but reunited this year and released their first CD in more than a decade, “Telephantasm,” consisting mostly of old favorites. Bundled with the first million copies of the video game "Guitar Hero: Warriors of Rock," the CD is guaranteed to be a big seller.

Thayil, who conceived the album’s name, explained its significance to Rolling Stone: “‘Tele’ is at a distance, or from afar. And 'Phantasm' is an illusion, or could be used to refer to a ghost. So I guess 'Telephantasm' would be an illusion at a distance, or a ghost from afar. Which I think would be an appropriate reference to what we have here—a retrospective of a band that had been inactive for thirteen years."

THAYIL BY THE NUMBERS

2 Grammy Awards as a member of Soundgarden
21 Songs he composed for Soundgarden
24 Age when he co-founded Soundgarden
50 His age (He was born Sept. 4, 1960, in Seattle, Wash.)
100 His ranking on Rolling Stone’s list of all-time best guitarists
20 million Soundgarden’s estimated record sales worldwide

"I play guitar because I like to make loud noises. And the guitar is the coolest way to make a loud noise."
(DigitalDreamdoor.com)

“Your lack of technique can be part of your style. The thing about style is that it’s more entertaining, more important and hopefully more intellectual than technique.” (GuitarWorld.com)

THAYIL ON THE WEB