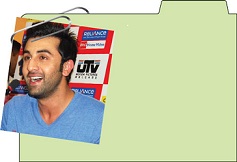 KAPOOR QUOTES
“I have an ambition and I am out to fulfill that. I want to do some memorable roles in films. I want to work with good actors, actresses, directors and producers.” (Bollywood.com)
“(My father) is my biggest critic. He has always called a spade a spade. If he appreciates something that I've done, it truly feels special.” (Bollywood Hungama)
“Just growing up in a film family was a lesson in itself because all our conversations revolve around films. My family is very passionate about cinema.” (IANS)

KAPOOR FACTS
A member of Bollywood’s prominent Kapoor family—he is the grandson of legendary actor Raj Kapoor, son of Rishi Kapoor and Neetu Singh, and cousin of Kareena and Karishma Kapoor—he studied at Bombay Scottish School, then honed his acting skills at the Lee Strasberg Theatre and Film Institute in New York City.
He made his debut in the 2007 film Saawariya, winning an IIFA Star Debut Award and a Filmfare Best Male Debut Award. His performances in the 2009 movies Wake Up Sid, Ajab Prem Ki Ghazab Kahani, and Rocket Singh: Salesman of the Year also won him a Filmfare Critics Award for Best Performance.
His latest movie, Raajneeti, directed and produced by Prakash Jha, was released last month and has received positive reviews.
He dated Deepika Padukone for more than a year. They broke up last November.
KAPOOR ON TWITTER
Ranbir Kapoor has a Twitter account with more than 20,000 followers, but hardly ever tweets, unlike a number of Bollywood stars, including Shahrukh Khan, Salman Khan and his ex-flame Deepika.
"(Twitter is) a mystery to me,” he told reporters in Delhi recently. “I don't want to tell people 'I am eating now,' 'Now I am walking to the bathroom.' I don't understand the need to share these boring details of my daily routine with the whole world. I don't think I am interested in Twitter that much."