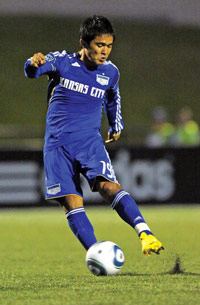 CHHETRI BY THE NUMBERS

"I never knew I could make a profession out of football. … The main motive for me was to get a certificate that can get me into a good university.” (Rediff.com)

Chhetri’s mother, Sushila, once played for Nepal’s national women’s soccer team; his father, KB Chhetri, a retired army officer, was also passionate about soccer. Together, they nurtured their son’s talent.

He played soccer throughout his school days in Darjeeling, Kolkata and Delhi, and was signed by one of India’s top club teams, Mohun Bagan, when he was just 16. He played eight years in India’s top league, making 93 appearances and scoring 43 goals for four teams.

He made his first of 35 caps for India at the 2004 South Asian Games. His brightest moment on the international stage came in the final of the AFC Challenge Cup on August 13, 2008, in New Delhi, when he scored a hat trick against Tajikistan, propelling India to a decisive 4-1 victory and an automatic berth in the 2011 Asia Cup.

Chhetri was signed by the Kansas City Wizards on March 25, becoming the first Indian to join Major League Soccer (MLS). A reserve player, he made his debut for the Wizards on April 13, playing 45 minutes in a 1-2 loss to the Colorado Rapids.

It didn’t take long for KBChhetri to notice that his son had a talent for soccer. “When Sunil could barely stand on his feet, I once gave him a big balloon,” the older Chhetri told Goal.com. “Instead of catching the balloon, he started to kick it. Every time that I would give him the balloon, instead of using his hands, he would kick it.”