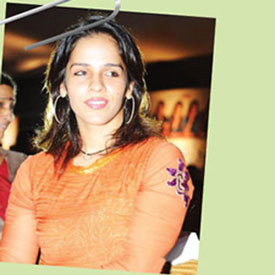 NEHWAL BY THE NUMBERS

2 Highest world ranking in badminton
3 Super Series titles
5’5” Her height
8 Age when she started receiving coaching
20 Her current age (she was born March 17, 1990, in Hisar, Haryana)
130 Her weight in pounds

“Success to me is a combination of hard work, excellent training given by my coaches and above all God’s grace.” (isport.in)

“Everything has happened so fast in my career. I have worked hard for it. But I do not want to be satisfied with what I have achieved, though it has come at a young age. I just want to keep winning.” (Sify.com)

“I have always been a disciplined sportsperson. I am always 15 minutes early in practice sessions. I am focused. I cannot stay away from the badminton court for a single day!” (Zeenews.com)

Born to badminton-playing parents from Haryana, Nehwal’s potential was recognized at age 8 when her father, Harvir Singh, took her to meet Coach Nani Prasad at the Lal Bahadur Shashtri Stadium in Hyderabad. Riding to the stadium at the back of her father’s scooter, she would train for two hours each morning before school.

She attracted her first sponsor at age 12 and won the Czechoslovakia Junior Open the following year. A bronze medal at the 2006 Commonwealth Games cemented her status as a rising star in badminton.

Coached by former All-England champion Pullela Gopichand, Nehwal has won three Super Series titles: the Indonesia Open (2009, 2010) and the Singapore Open (2010). She is currently ranked No. 3 in the world, but was No. 2 for several weeks this year. She was an overwhelming favorite to win the gold medal in women’s singles at the Commonwealth Games in Delhi.

NEHWAL ON THE WEB

Nehwal appears on the show “Your Call”