Home > Magazine > ChaiTime > TILL DEATH (AND POLITICS) DO US PART

TILL DEATH (AND POLITICS) DO US PART 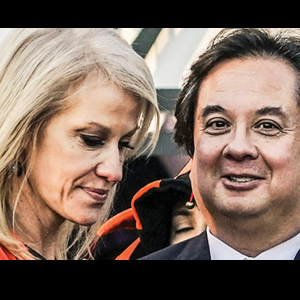 Can marriages survive when spouses disagree on politics? Indeed they can, as we’re witnessing in America with the high-profile example of Kellyanne Conway and George T. Conway III.

Kellyanne is a counselor to President Trump, part of his inner circle, while George is a founding member of the Lincoln Project, a conservative Super PAC dedicated to making Trump a one-term president.

The Lincoln Project has released a series of anti-Trump ads, including one called “Mourning in America” that blames Trump for making America “weaker, sicker and poorer.”

Soon after the ad was released, Trump fired back on Twitter at Conway: “I don’t know what Kellyanne did to her deranged loser of a husband, Moonface, but it must have been really bad.”

Kellyanne and George are both staunch Republicans, and until Trump’s campaign took off in 2016, they may not have anticipated disagreeing so publicly. Their marriage has lasted almost two decades, so their disagreements on Trump are unlikely to break them up. But it’s not unusual for politics to interfere with marriage, as it did a few years ago in Uttar Pradesh.

According to a Times of India report, an engaged couple met at a temple in Kanpur to discuss how they would pay for their marriage ceremony. The subject of the economic slowdown in India came up, and the bride, a government employee, blamed it on Prime Minister Narendra Modi. The groom, a business owner, was a Modi supporter and disagreed vehemently. Following a heated argument, the couple decided to call off the wedding.