TOO OLD TO BELIEVE? 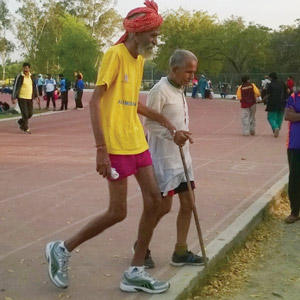 An Indian runner named Dharam Pal Singh was eager to compete in the World Masters Athletics Championships, a competition for older athletes held recently in Perth, Australia. He wanted to run 100, 200, and 400 meters, and would have been guaranteed to win his age group. That’s because, according to his passport, Singh was born on Oct. 6, 1897. At age 119, he would be not just the oldest runner in the world, but also the oldest man on record.

As the New York Times reported, Singh, a cow herder in Meerut, Uttar Pradesh, was unable to compete in Perth because he didn’t receive an official entry card and couldn’t get a visa. The truth of the matter is unclear, but doubts about his age were likely a factor. Singh was unable to convince officials that he’s really 119, partly because he doesn’t have a birth certificate.

“We have absolutely nothing to prove how old he really is,” Sandy Pashkin, chief record keeper for World Masters Athletics, told the Times. “He could be 80; he could be 100. We don’t know.”

Singh, who attributes his longevity to consuming cow’s milk, herbal chutney, and seasonal fruit, is disappointed he couldn’t compete, but more for India than himself. “I am trying to increase the pride of my nation,” he said. “My body is dedicated to my country.”

Despite the setback, he plans to continue running a few kilometers a day. “I may compete until I’m 125,” he said.