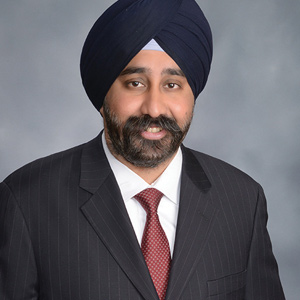 Ravinder Bhalla, a councilman in Hoboken, New Jersey, would like to have lunch with a Twitter user from Union City, New Jersey, named Robert Dubenezic and teach him a thing or two about Muslims and Sikhs.

After the Sikh politician sent out a tweet about turning part of Hoboken’s waterfront into a multi-use path for bikers, joggers, and others, Dubenezic responded with some bigotry: “How the hell did Hoboken allow this guy to be a councilman? Shouldn’t even be allowed in the U.S. #terrorist.”

When other Twitter users pointed out that Bhalla was born in New Jersey, and Dubenezic’s ancestors were immigrants themselves, Dubenezic responded with more ignorance. “No towel on my head,” he wrote.

Bhalla, who had never before been targeted with racist tweets, believes that the political rhetoric of Donald Trump has fueled hatred against minorities. Dubenezic, who often rails against Muslims on Twitter, has called Trump the “savior of Western civilization.”

Bhalla told the New York Daily News that he’s trying to find Dubenezic and hopes to have lunch with him. “One thing [Sikhs] believe in is forgiveness,” Bhalla said. “So I don’t hold any malice toward this individual. In a way, I feel bad for him.”