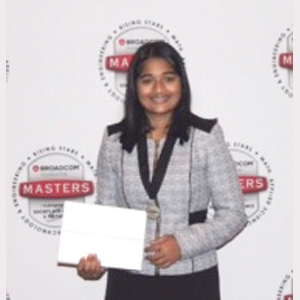 Ananya Ganesh is a student at Westminster Schools, Atlanta. She participated in the Georgia State Science Fair 2016 and won many awards including the Biotechnology Award sponsored by Merial, Best in Category for Biomedical and Health Sciences, and best overall 8th grade project. She was also nominated for the sixth annual national Broadcom MASTERS competition.

Broadcom MASTERS (Math, Applied Science, Technology, and Engineering for Rising Stars) is a national middle school STEM competition of the Broadcom Foundation and the Society for Science & the Public, designed to inspire and encourage the nation's young scientists, engineers, and innovators.

To qualify for the Broadcom MASTERS, students must place within the top 10% in a Society-affiliated science fair. Nominees then enter the competition by completing an application explaining their science project and demonstrating their use of STEM principles. 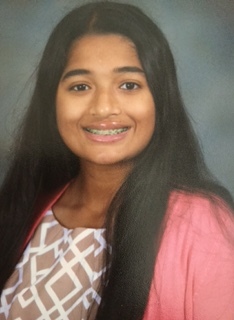 This year there were about 6000 nominees and 2434 applicants around the country. The 300 semifinalists were selected and finally the 30 finalists (including Ananya) were invited to Washington, D.C. from October 28 to November 1, 2016 to present their research projects and compete in team hands-on STEM challenges to demonstrate their skills in critical thinking, collaboration, communication, and creativity. Challenges included a Raspberry Pi challenge, building robotic blue crab arms, designing brains for space, and a nutritional game challenge. Dozens of judges and the public attended the 2016 Broadcom MASTERS Project Showcase on Saturday, October 29 at the National Geographic Society. Students from local schools, parents, and members of the public came to meet the finalists and learn about their projects.

Winners were announced at the awards gala at the Carnegie Institution of Science on Tuesday, November 1st. Ananya won 1st place in the Science category of the STEM awards for her project titled, “Bruxism: Using Myoelectric Signals to Treat a Common Health Problem.” Her prize included an iPad and $3,500 to support her choice of a STEM summer camp experience in the U.S. Additionally finalists also won a Raspberry Pi and had the honor of a minor planet discovered by MIT's Lincoln Laboratory named after them.