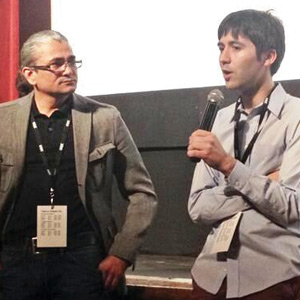 Anshul Jain’s feature film, The Space Jockey Pursuit, is one of the few Georgia-made films that made a buzz at film festivals last year. Filmed in Georgia, Tennessee, Illinois, and North Carolina, it was in film festivals in California, Massachusetts, New Jersey, and Florida in 2013, as well as being shown in India in Mumbai and Bhopal. At the Macon Film Festival, which ran from February 25 to Mar 2, it won the Audience Choice Award for Narrative Feature.

Producer Anshul Jain of Smyrna, Georgia, received his Bachelor’s degree in Sculpture from Maharaja Sayajirao University of Baroda, India, and joined the Indian film industry in Mumbai, working in TV, films, and music videos. Having found his calling, he joined the Savannah College of Art and Design (SCAD), Savannah, Georgia for an MFA in film and television. After working at Paramount Pictures in Hollywood and Victory Studios, he has returned to Atlanta to make independent feature films with his own company Rajmati Films.

Synopsis of The Space Jockey Pursuit: A strict method actor, Alvin always commits himself completely. For the past year, he has lived in a mental institution doing character research. But to break into Hollywood, Alvin must first break out of the nuthouse. He finds an accomplice in his brother Tom.