Aparna Bhattacharyya is “Champion of Change” 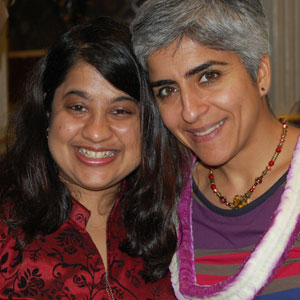 In May, as part of the White House’s observance of AAPI Heritage Month, Aparna Bhattacharyya of Atlanta and fourteen other Asian American and Pacific Islander (AAPI) women were honored as “Champions of Change.” The event recognized them for doing extraordinary things to create a more equal, safe, and prosperous future for their communities and the country. The Champions of Change program was created as an opportunity for the White House to feature individuals, businesses, and organizations that work to empower and inspire members of their communities.

“The White House Initiative on Asian Americans and Pacific Islanders hosted a luncheon for the honorees,” noted Bhattacharyya, who met AAPI’s White House Initiative’s Executive Director Kiran Ahuja and Congresswoman Tulsi Gabbard, among others. “I was amazed to hear about the uplifting work done not only by the AAPI politicians but by my fellow AAPI Champions of Change.”

Bhattacharyya, born and raised in Atlanta, has served as Executive Director of Raksha since 1998. She graduated from Georgia State University with a B.S. in criminal justice. After volunteering and working as a victim advocate for five years for the city of Atlanta’s Victim Witness Assistance Program (VWAP), she developed the multicultural components of the 1996 Olympic Crisis Response Team. She was one of the many victim advocates who responded to the Atlanta Olympic bombing in 1996. She also worked as a project coordinator/employment specialist for the Newcomers’ Network’s Refugee Family Violence Prevention Project, where she developed and implemented the License to Freedom Project to help battered refugee women find jobs and obtain driver’s licenses.

From 1995 to 1998, she volunteered and served as a steering committee member of Raksha Inc. before becoming an employee. As a representative of Raksha, she has served as founding task force member and Board Secretary for International Women’s House (the first shelter in the Southeast for battered immigrant and refugee women and their children) and as a founding member of Tapestri, the Immigrant and Refugee Coalition challenging gender-based oppression.

Along with the Director’s Eagle Award from the Criminal Justice Coordinating Council in 2006, she received the Georgia Commission on Family Violence Gender Justice Award in 2008 and the DeKalb County Domestic Violence Task Force’s Deborah C. McDorman Award in 2008. She is currently on the Board of the Georgia Coalition against Domestic Violence, the National Immigrant Women’s Advocacy Project, and is the Board Chair of VIDA Legal Assistance.

Bhattacharyya is an alumna of Leadership Atlanta’s Class of 2010, and a 2009 recipient of the Center for Pan Asian Community Service’s Asian Women’s Leadership Development Grant.