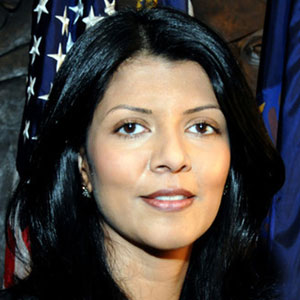 As Chief Operating Officer for the City of Atlanta, Duriya Farooqui directly manages and oversees all city operating departments and related agencies, including Aviation, Police, Fire, Corrections, Parks, Recreation and Cultural Affairs, Planning and Community Development, Public Works, Watershed Management, Human Resources, Procurement, Information Technology, Sustainability, and Enterprise Assets. Appointed by Mayor Kasim Reed, she is the youngest person to serve as Chief Operating Officer for Atlanta, the first Asian American, and the third woman to hold the position. She has led major Reed administration initiatives across the city to drive results in public safety, service delivery, and improved operations across city agencies, including Hartsfield Jackson International Airport, the busiest airport in the world. Farooqui is responsible for the management of over 7000 city employees and ope- rations that span an annual budget of over $2 billion.

In 2011, Farooqui played a critical role in developing the analysis and proposals that led to Atlanta’s successful effort to reform its $1.5 billion unfunded pension liability, legislation that was unanimously approved by the Atlanta City Council and is projected to save the city $500 million over 30 years. Prior to joining the City of Atlanta, Farooqui focused on international economic policy and worked for the World Bank, The Center for Global Development, and the Center for International Development at Harvard University. Farooqui holds a master’s degree in public administration and international development from the Kennedy School at Harvard University and was awarded a fellowship on merit of professional promise.