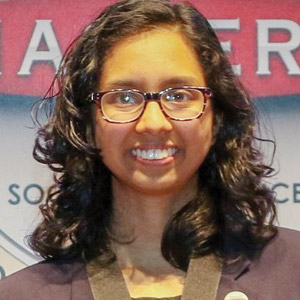 Asmi Kumar, at 14, now a ninth grader at Milton High School in Milton, GA, was among the 2018 middle school winners of the Broadcom MASTERS competition held in Washington, D.C. A STEM awardee, she won second place (and $2500 to support her choice of a STEM summer camp experience) in the mathematics category for developing a device to predict autistic meltdowns using Arduino and MS Azure.

She also won a team award, along with Sriram Bhimaraju and Akshaya Venkatesh, for demonstrating the ability to work together and solve problems through shared decision making, communication, and scientific and engineering collaboration.

There were 30 finalists, chosen from 2537 applicants, and the winners of various categories were picked by a panel of scientists, engineers, and educators. Each finalist’s school receives $1000 to support their STEM program. Apart from being judged on their projects, the finalists took part in challenges that tested their strengths in STEM, critical thinking, communication, creativity, and collaboration.

Atlanta born and raised 14-year-old Asmi Kumar, a 9th grader at Milton High School, Milton, GA is a powerhouse of curiosity, creativity, and passion for science and math. Her mom Ruby Kumar, who majored in Organic Chemistry at Patna Science College, and her dad Nikhil Kumar, an IIT Kharagpur graduate, moved to the U.S. from Patna, India in 1997. She has been raised in a close knit family, nurtured by her loving and supporting parents.

Young Asmi is an exemplary student who has earned much praise, admiration, and awards for her participation and prowess in the math and science areas. For Asmi’s first science fair project, she built the Communicable Disease Spread Simulation (CDSS). This model enables the spread of an unpredictable disease to be both visually displayed and the data underlying it to be efficiently stored. By applying a set of rules, one can discover the growth of diseases over a certain time period in any scenario and compare speeds and severities.

Eventually, this inspiration guided her to new projects and ideas, most notably “Developing A Device to Predict Autistic Meltdowns.” Asmi built a prototype of a wearable wrist device that tracks the heart rate of users in order to predict the heart rates at which the user could likely experience a meltdown. This data is sent over via Bluetooth to a mobile application on an external device. Using specialized analysis processes along with machine learning algorithms, the data would be studied for anomalies, which could be indicators for meltdowns. If a meltdown is suspected, a push notification is outputted to a phone paired with the wearable. Using this device, effects of autism can be predicted, deferred, and potentially prevented. At the Georgia Science and Engineering Fair (GSEF), she was the overall Computational Biology and Bioinformatics category winner, a First Honors winner, and the winner of the Boehringer Ingelheim Animal Health Award. For her successes with this project, Asmi even has Minor Planet "34342 Asmikumar" named after her on behalf of MIT's Lincoln Laboratory!

As an eighth grader at Northwestern Middle School, Asmi, with this project, earned a spot as a top 30 nationwide scientist at the prestigious and challenging Broadcom MASTERS competition in Washington, D.C. in October 2018. This phenomenal science fair competition begins with 80,000 participants. Then, the top 300 are first announced as semifinalists, and finally the top 30 finalists nationwide. With her project, “Developing a Device to Predict Autistic Meltdowns,” Asmi competed in a five-day event, and interacted and presented her work to researchers, science media, and diplomates. Here, Asmi won the Mathematics category, and was the sole winner from her state. In addition, Asmi is a two-time national winner of ProjectCSGirls and has also earned 1st place in both County and State Technology Fairs for this project.

Recounting her experience at Broadcom and the White House, she excitedly said, “I had amazing experiences meeting with students having similar interests, passions, and desires for researching in STEM from all over the nation. During presentations, events, and team-building with others, I loved exploring my fellow peers’ projects, and we bonded over our passion for science, thoughts and ideas, and projects. Broadcom MASTERS is a once in a lifetime opportunity, and sharing your project with people who are eager to know how you’re changing the world is something truly special. Meeting and collaborating with Ivanka Trump and other White House officials was amazing! I also received recognition and a certificate from Georgia Senator David Perdue, and visited his Washington DC office.”

As a freshman, Asmi currently takes AP Calculus BC, which is a senior-level class and the highest high-school math class offered at her school. Asmi considers math her greatest passion. She is heavily involved in her school’s math team and places well in rigorous competitions such as the national American Mathematics Competition (AMC), as well as state competitions at Georgia Tech, UGA, and others. Asmi was a national MATHCOUNTS finalist in May 2018 and was one of the top four mathletes in Georgia for this competition. In fact, she was the first girl in several years to qualify for this! Asmi is on the Georgia ARML team, which selects the top 40 state high-school mathletes for a state math team to compete in national tournaments. She is also the winner of the MathMovesU national competition and is a Grand Recognition Awardee in the Duke Tip Talent Search. In addition, Asmi won several awards at the Georgia State Media Festival for her technological advancements and work, including Certificate of Superior Achievement, Outstanding Media Production, and Perfect Score & Best in Show. She consistently places well in local math tournaments through her school. Asmi was granted $2,000 to give back to her middle school on behalf of the Broadcom and MATHCOUNTS, and also earned $2,500 for a STEM summer camp, an iPad, and an iPod at Broadcom. Asmi is also an avid speller and won the regional Kaplan K-4 Spelling Bee as a kindergartner!

When asked about what she considers her significant accomplishment in community service, Asmi said that as a member of Milton’s Mu Alpha Theta National Mathematics Honor Society, every year, she sets up, runs, moderates, and writes problems and solutions for an elementary school math tournament, Mini-Mathletes, incorporating thought-provoking problems, games, and awards. She’s super passionate about furthering girls’ education in STEM. This past year, she submitted an essay for the Association for Women in Mathematics about her women teachers’ journeys and was named the middle-school champion. She often hosts summer math circles at a neighborhood clubhouse and tutors students in her local area.

Asmi has an impressive roster of extracurricular activities to help her relax and enjoy academic life. She is majorly involved in her school's math team for several years. She sings in an advanced choir and plays basketball. She also participates in math, science, and technology competitions through her school. Asmi also plays piano with depth and feeling. “The music a piano can create is beautiful and so relaxing,” she says. I have been playing for nine years, and had the honor of performing at the prestigious Spivey Hall at Clayton State University multiple times.

Asmi is fond of literature, and shared that she loves to read (and write fiction, too!). “I especially enjoy well-written mystery and crime books, because I like the suspense and how it keeps me engaged, looking for clues, and turning the pages. I love feeling so immersed in a story, that it forms my own "bubble." I’ve read Harry Potter time and time again, and love J.K. Rowling. I appreciate nonfiction as well, though it isn’t my favorite genre. It’s fascinating to learn about past events in history that still continue to have an effect on the world today.”

Asmi’s biggest inspiration is her sister Agni who was the valedictorian and star student of Milton High School's Class of 2016 in Milton, GA. Agni now attends the Massachusetts Institute of Technology as a junior, and double-majors in Computer Science & Engineering and Mathematics with a minor in Economics. Asmi says, “She is unbelievably supportive, generous, and vivacious. I hope to continue to follow in my sister's footsteps and look up to her as my biggest influence and motivator in life.”

Asmi is not resting on her laurels and states, “I will continue to participate in competitive math contests, statewide science fairs, and technology competitions, both local and nationwide. I am also looking forward to attending a STEM summer camp this summer.” For the future, she explains that, “the applications of computing to accessibility problems are endless, and I’m particularly excited about making a difference in such areas! The field of Computer Science has an unthinkably large reach through its many applications. Experience in computer science allows one to solve complex, challenging problems, test theoretical ideas, and create something better, more creative, and more innovative through engineering and iteration. I am passionate about learning and using AI to propose accessibility tech solutions—building devices and experiences for the impaired. I want to pursue data science to continually experience the thrill of deriving meaningful insights from signals, and also greatly value helping others, so I hope to combine my technological passions with my inner values.”

Asmi has superlative learning skills, innate curiosity and a flair for creativity. Her exciting journey, full of hope and promise and yet untapped potential continues.