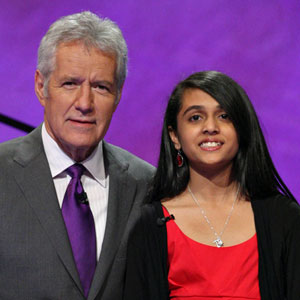 Kids Week is one of Jeopardy!'s annual special events, fun for kids aged 8-14 to play along with at home, just before school starts in the fall. This year, 9,000 kids, 10-12 years old, from around the country, tried out. The top 15, including three Indian American students, became contestants on TV. Each round presented three new contestants. As well as educational prizes including books, games, computers, etc., each third place contestant earns $1000, each runner-up $2000, and each winner keeps what they earned during their game.

Neha's secrets for winning? She really likes to follow current events and thinks it's a key to success on the quiz show. Her family enjoys Jeopardy! every night. And she knows just how to time pressing the buzzer: quickly, but not while the question is being read since there is a half-second delay before you can buzz again, "and that makes all the difference,” she says. Of course, knowing so many answers helped a lot!