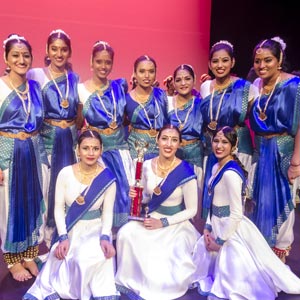 Founded in 2012, Emory Savera is the only classical fusion dance team that combines the styles of Odissi, Kuchipudi, Bharatanatyam, and Kathak. The dance group has gained popularity in recent years with their choreography to hip-hop, Bollywood, electronic and pop music.

This year, the team made a decision to focus on their classical roots by telling a story through dance. Instead of performing their typical fusion of the styles, they wanted to highlight Kuchipudi, Bharatanatyam, and Kathak by having dancers in each style performing side-by-side. Recognizing the influential quality that dance can have, Savera chose to raise awareness about climate change, an issue that plagues today’s society. 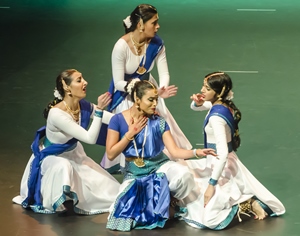 The title of the piece, “Prakriti,” embodies the equilibrium that underlies the principle of matter, but can loosely be translated to the “natural reality” in English. The story opens with the Earth as it once was—pristine. Mother Nature is played by a dancer who admires the beauty of Earth and the harmony of mankind with nature. Lumberjacks enter and are portrayed as an evil force. They tie Mother Nature up and chop down trees in order to build homes for themselves. This segment represents the deforestation of Earth. Following this, dancers convey sea levels rising. Mother Nature drowns at the end of this segment in order to illustrate that the Earth is literally diminishing under water due to the warming of the planet. At this point, Mother Nature is at her weakest. Air pollutants stalk her, and she proceeds to suffocate from the toxic air, clearly blind to the atmospheric change. The pollutants finally suffocate her, so she appears near death. Humans come back on stage and realize the destruction they have caused. They mourn for Mother Nature’s incapacitated state. The piece ends with humans trying to gradually fix some of the damage they have done, as Mother Nature looks on approvingly. 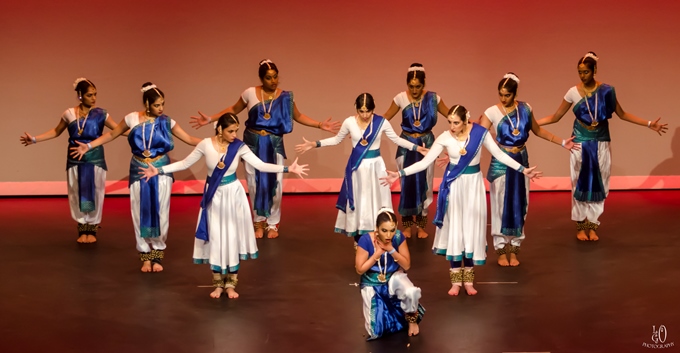 Accepted to perform at Navarasa, North Carolina’s premiere intercollegiate classical dance competition hosted at North Carolina State University, Emory Savera was impassioned to share their piece. The team was humbled to share the stage with the competing teams: Case Western Nritya, Tufts Pulse, Virginia Commonwealth University Thandavam, and Penn State Natya. The judges for the competition included Ramya Sundaresan Kapadia, Meena Rajagopal, and Rinku Bhattacharya Das. After an evening filled with brilliant performances, Emory Savera was honored to receive the second place award, accompanied by a cash prize. The team plans on allocating a portion of their winnings toward an environmental NGO, fitting with their theme for this year.

Bhavana Kaki of Navarasa kindly answered a few questions about the competitions.

Besides Navarasa at North Carolina State University, are there other national or regional team competitions for classical dancers, and where are they held?
There are a few other national classical competitions, but the total number is under 10:
Laasya which travels based on the winning team,
Dhirana at the University of Pittsburgh,
Mayuri at the University of Maryland,
Dheem Tana at UC Davis,
Hansini at UT Dallas, and
Tu Bi Nachle at George Mason University.

Another major difference is that each competition has its own judging rubric that varies; thus oftentimes rankings between similar teams are different at different competitions since each competition might focus more on a particular aspect of the dance. Some competitions are more traditional than others and some are much more established since they have been around longer.

What is special about your competition?
Navarasa is the first classically emphasized competition with a bhangra and raas showcase. We really wanted to provide another platform, especially in this area, in order to allow the classical circuit to continue to grow while also raising awareness about bhangra and raas. Plus, Navarasa combines trained judging of the classical teams with a viewers’ voting for a bhangra/raas winner. Oftentimes the more established competitions are dominated by the same eight teams, so by bringing another platform to the circuit we wanted to give lesser known teams a chance to compete and gain experience.

Navarasa is also proud to partner with Child Rights and You (CRY), a nonprofit that works closely with local charities to empower them in the most efficient way to help at-risk children. As a first year competition with planning only beginning 3 months prior, we are really happy to say we have raised over $7k for CRY.

How many colleges/universities have Indian dance teams?
Most universities that have a large presence of South Asian Indian students tend to have Indian dance teams. There are so many different dance styles in India and so many established competition circuits! There are competitions for Bollywood fusion, bhangra, raas, and classical dance. At NC State we have all 4 teams. Art is a huge part of Indian culture and most Indian children growing up are exposed to singing and dancing, whether it be taking lessons or performing on stage.

Do the teams belong to an organization?
They don't belong to one collective organization, but there is a network called DDN (Desi Dance Network) that is trying to establish organization across all circuits and teams.

What thought would you like to leave with our readers?
Dance is something that can unify people across any differences, and so we hope to see these competitions continue to grow so that more awareness can be raised about the importance of understanding and appreciating art!