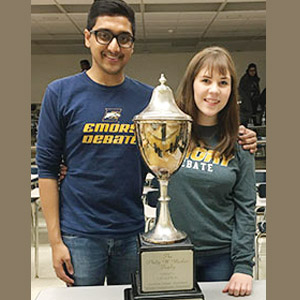 The Emory debate team of seniors Viveth Karthikeyan and Kristen Lowe, both ranked in the top 10 in the country, beat Harvard University’s team to win the American Debate Association’s 2017 National Championship. Karthikeyan, a neuroscience major, has been debating since ninth grade and won other tournaments, but this was his first national win. The team also went to the National Debate Tournament in Kansas City.

Research shows that students who debate bring their learning back to their communities; Karthikeyan plans to coach debate, go to graduate school, and eventually work in a lab using the research skills and work ethic he’s gained from competitive debate.